Niall Kearney hit a string of birdies to enjoy a fine start at the inaugural Gran Canaria Lopesan Open.

The Dubliner sits three shots off the lead after posting an opening round 66 at the Canary Islands event, which included four birdies in his final seven holes.

Starting on the back nine, Kearney was one under at the turn but handed a shot back on the second hole (his 11th), before finishing in style to move into contention at the European Tour event.

Cormac Sharvin also enjoyed a decent start and sits one shot further back from the Royal Dublin man.

The Ardglass golfer hit six birdies en route to a 67 at the par-70 track, however, he lost three shots in two holes with bogey, double bogey on the 11th and 12th.

Paul Dunne and Jonathan Caldwell are two under going into Friday's second round.

Tournament host Rafa Cabrera-Bello revelled in some socially-distant support as he made an excellent start to his bid to end an almost four-year winless drought on home soil.

Cabrera-Bello is following in the footsteps of the likes of Rory McIlroy, Lee Westwood, Justin Rose and Tommy Fleetwood in hosting a European Tour event.

And the 36-year-old, who was born on the island, ended the first round at Meloneras Golf just two shots off the lead after carding six birdies and a solitary bogey in an opening 65. 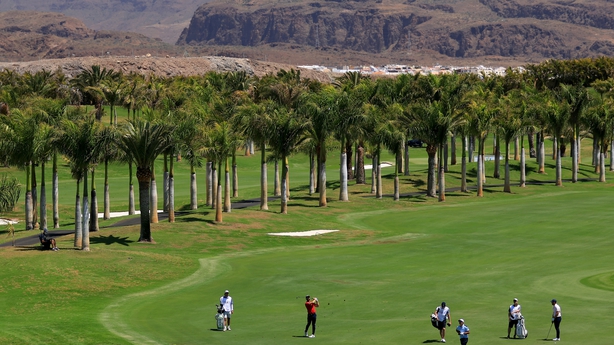 "I am very happy," said the former Ryder Cup player, who was unbeaten in three matches on his debut at Hazeltine in 2016 and won the Scottish Open the following year.

"I have been saying it all week that it is a pleasure to have the European Tour back in the Canaries and for someone that was born here, raised here, and I come as often as I can, I always tell everyone how nice it is here, so I am glad we get the opportunity to showcase it to the rest of the world.

"I am missing a big crowd but I am feeling the support. Some of the holes close to the road had people cheering which was cool, so I want to give them a big thank you for coming out even though they are not here as normal, but they were able to see a little bit of golf.

"Hopefully, this is not the last year we are here, and it becomes a permanent stop on the European Tour."

Holland's Joost Luiten, Denmark's JB Hansen, Germany's Max Kieffer - who lost a five-hole play-off in the Austrian Open on Sunday - and France's Robin Roussel shared the lead on seven under par, with Luiten making a hole-in-one on the 15th, his sixth hole of the day.

"It was a perfect number for me to hit a wedge," Luiten said. "It's tucked just over the bunker but you can use the slope, right to left. I pitched it on the slope with a bit of spin and it went in.

"It's one of these bonus things that happens sometimes, it's always nice to make a hole-in-one. This is my fifth on Tour, and my seventh overall. You can never have enough, I always say."

Scotland's Scott Jamieson and the English pair of Ben Evans and Matt Ford were among those a shot off the lead on six under par, Jamieson in particular enjoying the change in temperature from last week's event in Austria.

"I've never been that cold on a golf course," Jamieson said after his bogey-free 64. "I'm sure I've gone soft now I live in America.

"One of my tendencies is to move my arms too much and not my body, so when you have more clothes on and it's that cold it'll encourage you to turn less - so it's not for me."

Shot of the day ‼️