Justin Rose recovered from a stuttering start to set the early halfway target in the 85th Masters as a high-class chasing pack took shape at Augusta National.

Shane Lowry was more in step with his playing partner today - one shot worse off than the Englishman, with a one-over 73 that keeps him at even par heading into the weekend. He is seven shots behind Rose overall.

The pair had to grind it out today as the course kept them both on their toes.

Rose held a four-shot lead following a brilliant 65 on a tough opening day when just two other players broke 70, but saw that wiped out after covering his first 12 holes in three over.

Three birdies in the next four holes took Rose back out in front and a second round of 72 kept the 2013 US Open champion in pole position in pursuit of a second major title.

At seven-under-par, Rose was two shots ahead of Australia's Marc Leishman, who carded a 67, with Austria’s Bernd Wiesberger another stroke back following a 66.

Same as Thursday, it was a birdie finish for Lowry, however it was a tough start for the Open champion who dropped three shots on the first two holes.

The Offaly man got one back on the third but then dropped two more on seven and 11. Three birdies on the home straight mean he goes into the weekend on level par and just outside the top 20 as he finished. 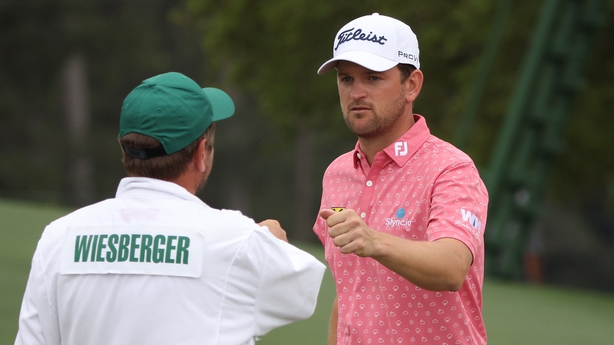 Rose got off to a shaky start with a pushed drive on the first and had to chip out sideways, although he responded to the resulting bogey with a birdie on the par-five second.

A bogey on the 247-yard par-three fourth was followed by two more on the sixth and seventh and Rose's overnight lead had fully disappeared when Wiesberger (above) made his seventh birdie of the day on the 15th.

Leishman then moved into the outright lead with his own birdie on 15, but Rose dug deep and birdied the 13th, 14th and 16th to edge back in front.

Wiesberger made a flying start with birdies on the first tree holes and picked up further shots on the fifth and eighth to race to the turn in 31.

The 35-year-old, who sent an eagle chip on the 15th across the green and into the water during his opening 74, also birdied the 10th and recovered from his only bogey of the day on the 12th with a birdie on the 15th.

"I tried to follow up on what Justin did on the last 10 holes yesterday and got off to a really good start," said Wiesberger after his first sub-70 score at Augusta.

"I got into some good positions to attack some of the flags but the greens definitely played a touch softer. I putted beautifully the first nine or 10 holes and I’m really glad to get my lowest career round in the Masters.

"I’m really looking forward to the weekend. I feel so much more comfortable on the greens this week and when I have more freedom on the greens it eases the pressure on my approach game."

Scotland’s Robert MacIntyre comfortably made the cut on his tournament debut after adding a 70 to his opening 74 to finish level par.

"Yesterday the nerves, I was shaking on the first tee," the left-hander admitted. "It’s normal here, but I wanted to get right back in the golf tournament. That’s what I went and done.

"I’m going to have a chance over the weekend if I can post a good one tomorrow."