Shane Lowry started his Honda Classic with a solid three-under 67 to trail the first-day pacesetter Matt Jones by six shots.

Australian Jones birdied his final three holes to tie the PGA National course record with a nine-under 61 to grab the early lead in Palm Beach Gardens.

But Lowry will be content with his opening round, which gives him a good platform to launch a weekend charge.

Graeme McDowell had a disastrous first 18 holes however. He shot a nine-over 79 to sit second bottom on the leaderboard.

Ryder Cup captain Padraig Harrington, who has won this event twice, shot a two-over 72 that featured four birdies, as many bogeys and and a double-bogey on the par-three 5. 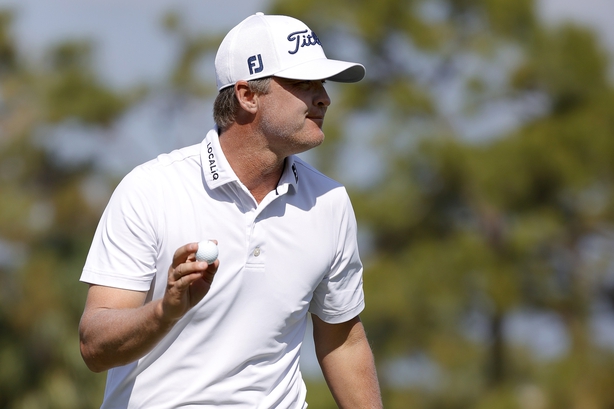 Jones, 40, entered the week ranked 83rd in the official world golf rankings.Taking advantage of relatively calm winds during the morning wave, he carded abogey-free opening round.

"I don't know if you ever know it's special," Jones said of his round. "I was just managing the golf course and hitting good shots."

Jones held a two-shot lead over Aaron Wise and Russell Henley, who both carded six-under 64s during the morning wave. Cameron Davis, Kevin Chappell, Steve Stricker, Joseph Bramlett and Scott Harrington were another two shots off the pace at four-under.

Thursday's 61 was the lowest score in Jones' 14 years on the PGA Tour. And he accomplished it on one of the Tour's most difficult courses.

While he doesn't have a stellar track record at PGA National, Jones' tie for fourth at the Honda Classic in 2008 was one of his best career finishes.

"I don't know why I always feel comfortable on this golf course," he said."There's so many uncomfortable golf holes out there. But it is a course I do like playing, and if I'm hitting it the way I am today the rest of the week, it'll be a good week."