Padraig Harrington secured his best finish in over two years - a tie for sixth - as Paul Casey won the Omega Dubai Desert Classic on Sunday.

Harrington shot a final round 70 to finish on nine under par, eight strokes behind the eventual winner. It's the seventh consecutive tournament that the Dubliner has made the cut, and marks his best result since finishing fifth at the KLM Open in September of 2018.

The Ryder Cup captain was one over for his round on the front nine following one birdie and two bogeys, however, the Dubliner played flawless golf on the back nine, collecting three shots back with birdies on the tenth, 14th and 17th holes.

Shane Lowry shot his worst round of the week, a frustrating 75, to finish on four under in tie for 27th.

Casey came into the final round with a one stroke lead, but ended up four clear of South African Brandon Stone after hitting six birdies and three bogeys.

A rejuvenated Casey says he has re-discovered his love for golf after claiming his landmark 15th European Tour title.

Winner in Abu Dhabi in 2007 and 2009, Casey completed a desert hat-trick with a closing two-under par 70 to finish 17 under at Emirates Golf Club, four ahead of Stone, with Scotland's Robert MacIntyre at 12 under.

Ryder Cup hopeful MacIntyre, who was bidding for a second success in six starts after a breakthrough win in the Cyprus Showdown in November, started the day one behind Casey and was well in contention before carding four consecutive bogeys around the turn on his way to a two-over 74.

Fresh from victory in California, Casey says he is now enjoying the game once more and is delighted to be back playing in front of fans, even if they are socially distanced, after experiencing a low point during the coronavirus pandemic.

"I've not enjoyed a minute of it," he said. "It's been totally soul-less, with no emotion. It's just not been a fun time.

"We had some fans this week. They were amazing.

"I've realised how much I love doing what I do but in an environment with people watching. It could be heckling or cheering, that's part of what we do.

"Last year was rubbish but I'm now enjoying my golf, I feel fine with where I'm at.

"I've worked incredibly hard over the last few months. Here I am rejuvenated, sponsors, new equipment and a couple of people standing around a golf course. I feel totally different." 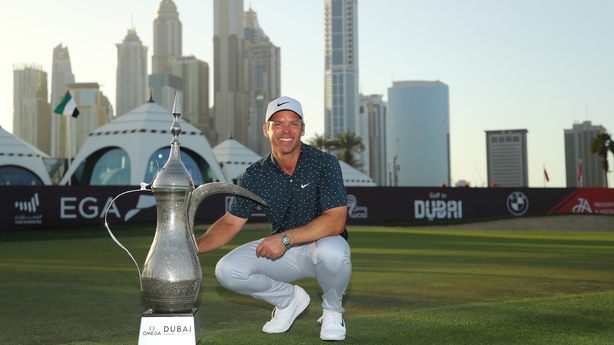 Casey turned in level par 35 but that was enough for a three-shot advantage which he extended to five with five to play.

That gap was trimmed over the closing holes but the 43-year-old never looked in any danger as he cruised to a triumph that moves him back into the world's top 20.

"It was the trickiest conditions all week," he said. "I didn't look at the leaderboard until I came down the 18th so didn't know what was going on.

"I was just trying to keep my nose clean. I did what I needed to do."

The victory boosts Casey's chances of being named in the team for September's Ryder Cup and captain Harrington was waiting at the finish to congratulate him on his victory but the Englishman says he wants to win his place in the team on merit.

Casey, who has appeared in four Ryder Cups, said: "There's a long way to go. I'd love to be part of this team, in any capacity.

"I'm a long way back in points - my world ranking points in California last week don't count - which means I'm a bit behind so this is a big boost.

"I want to make the team, I don't like being a pick if I can help it. I'll accept it but I don't really want to if I can."

Casey, whose victory enables him to equal both Harrington and former captain Thomas Bjorn for European Tour wins, says MacIntyre would be a worthy addition to the Ryder Cup team.

"He's got very strong possibility of being in Paddy's Ryder Cup team," he said. "He was brilliant. He was great to play with, if anything he helped me.

"I'd feel very comfortable standing next to him on the first tee at Whistling Straits. And he's only going to get better and better."