Shane Lowry says there is a lot more to Bryson DeChambeau's game than just "bombing and gouging".

The 27-year-old American was the only player to finish under par (-6) as he claimed his maiden major title at last week’s US Open at Winged Foot in New York.

Known for his powerful drives, DeChambeau is taking a non-traditional route to success and that has impressed Offaly man Lowry, the 2019 Open champion. 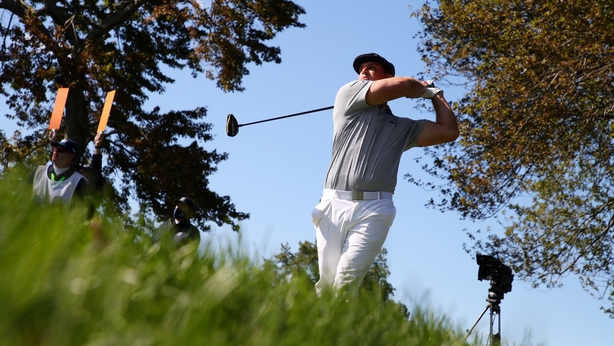 "Sunday, for him to shoot three under when nobody else shot under par – nothing more needs to be said.

"People are going to go on about how far he’s hitting it, that he’s just bombing and gouging it but I think, in relative terms, he hit a lot of fairways.

"He was maybe top 20 in driving accuracy and he also finished top five in putting so I think you need to do that stuff to win tournaments like that.

"I only hit 50% of fairways last week but I was tenth in driving accuracy. The fairways were just really hard to hit, a lot of cross winds, a lot of dog-legs.

"I think what Bryson did was incredible, whether people like him or not he’s one of the best players in the world and he will be for a long time because not only does he hit it 330 yards through the air, he hits it straight as well."

Asked about his own chances in this week’s Dubai Duty Free Irish Open, which starts tomorrow in Galgorm Castle, Co Antrim, and sees Lowry tee off at 9.25am, the 33-year-old said: "I got in my [own] way in the first round last week, trying too hard again.

"I get caught with that sometimes. I just need to go out and be myself and let myself play golf and express myself on the golf course like I do when I’m playing well. I think I can do all right this week."

This week Lowry will be sporting the 20x20 logo as he bids to raise awareness for the campaign.

"The opportunities for women in sport now are getting a lot better and they need to get a lot better than they are now," he said.

"They are better now than there were 20 years ago and in 20 years' time when [my daughter Iris is] old enough hopefully they are way better and up to the standard they need to be at."