Ireland's Brendan Lawlor toasted a "fantastic week" as his historic appearance at the ISPS Handa UK Championship came to an end.

Louthman Lawlor made history on Thursday morning when he became the first professional disability golfer to compete on the European Tour.

He failed to make the cut at the Belfry course on Friday but that hardly lessened his incredible achievement.

"I got off to a good start, I thought my front nine was very solid," Lawlor told RTÉ Sport afterwards.

"I was three-over after nine which is pretty good. The course was playing quite long, it was really tough and it was raining and windy.

"I missed a few short putts and got into the back nine with a good par on 10 and a good par on 11 but made a triple bogey on 12 so the momentum was killed a wee bit."But it was a fantastic week, I can't complain. There was so much exposure for the game and that’s why I was here this week." 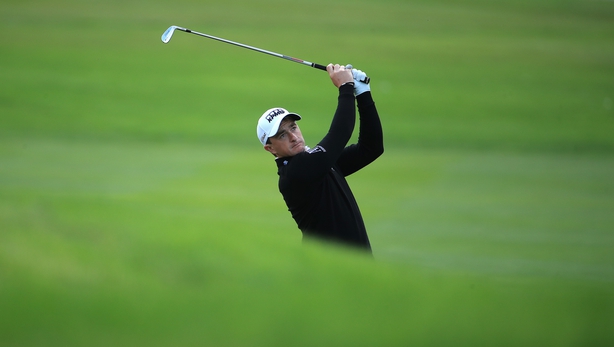 Paul Dunne also failed to make the weekend. The Greystones man finished on seven-over-par, well outside the cut mark of one-over.

Jonathan Caldwell just about squeezed in however. He sits on one-over, ten shots off South African leader Justin Walters.

Benjamin Hebert of France is one behind him on eight-under, while England's Paul Waring discovered that neither a lack of thinking nor competitive golf was a barrier to contending for a second European Tour title.

Waring has not played since the last week of February due to a combination of the coronavirus shutdown and a back injury which prevented him making his debut in the US PGA Championship earlier this month.

However, the 35-year-old from Birkenhead showed few signs of rust as he added a second round of 67 - the joint lowest score of the day - to his opening 70.

"I'd definitely take that with these conditions," Waring, who won the Nordea Masters in 2018, said. "We got through 13 holes and then on the par three 14th got a massive gust downwind. From there it was quite tough coming in, we had a rain shower too so I'm pleased to finish the round off.

"The short game has been really tidy. When I have missed it I've made a really easy up and down and haven't put myself under any pressure."