A strong finish from Justin Thomas was enough to claim the WGC-FedEx St Jude Invitational in Memphis and move to the top of the world rankings, with Shane Lowry high up the standings.

Brooks Kopeka's challenge ended with a wild drive on the 18th that found water and Thomas’ final round 65 saw him finish three shots ahead of a quartet of players that included Koepka, Daniel Berger, Phil Mickelson and Tom Lewis, with Lowry among a group of players a further shot adrift.

Lowry's strong final day saw the Offaly native score a 67 and finish on nine under.

Having started the final round on six under, he did not drop a shot on Sunday, gaining birdies on the third, eight and 16th holes.

Graeme McDowell finished six shots further back on three under after a 69, while world number two Rory McIlroy bounced back somewhat to record a 67 which lifted him from two over to one under by the end of his round.

The four-time major winner birdied the first, 12th and 17th as he managed a bogey-free front and back nine.

Beautiful touch from @JustinThomas34 on 18.

The win cut short Rahm's reign at the top of the rankings, with the 25-year-old Spaniard spending just two weeks as the world number one.

"It was a hard-fought day," said Thomas. "Besides that terrible wedge on 12, I played so well for 14 holes. I drove the ball just perfectly ... I realistically could have birdied my first 10 holes today and that is kind of bizarre to say."

Any hope Koepka had of claiming a last-minute victory evaporated on 18, as he drove his ball into the water for a double-bogey.

"I feel good. I feel like my game's right there, everything's solid. I hit a lot of good putts today, just didn't go in," said Koepka.

"Obviously drained a big one on 17 and then you're down one. You've got to take an aggressive line on 18, so it is what it is."

An electrifying performance with five birdies on the front nine helped Lewis (66) to surge up the leaderboard in early play on Sunday, after he carded nine-under par 61 on Saturday, but a pair of bogeys on 13 and 17 had him settling for second.

Brendon Todd, the leader heading into Sunday, carded a disastrous five-over par 75, losing his edge and shooting three straight bogeys on 13 through 15.

Rickie Fowler started the day in contention for the win but finished the final round with a disappointing three-over par 73, thwarting his attempt to pick up his first PGA Tour victory since last year's Waste Management Phoenix Open. 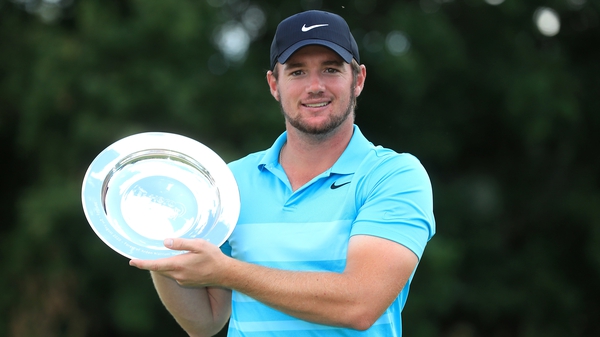 Horsfield the hero in claiming first win on European Tour