Rory McIlroy is three shots off the lead and second on the leaderboard after his opening round at the Travelers Championship, while Shane Lowry also made a strong start to the tournament in Connecticut.

McIlroy signed for a seven-under-par 63 to briefly take the clubhouse lead, while Lowry posted an impressive four-under 66 to eventually finish in the top 15 at TPC River Highlands.

But it's Canadian Mackenzie Hughes who holds the overall lead after he fired an error free 10-under 60 to grab the early first-round lead by moving three shots clear of McIlroy.

Playing the back nine first at the TPC River Highlands, Hughes was in blistering form as he strung together a run of five straight birdies from the 14th on his outward nine and picked up four more after the turn.

He had a long look at a magical 59 but left a 41-foot birdie putt short at his last.

"I've shot 61 twice in competition, once at Sea Island and once at a mini-Tour event," Hughes told reporters.

Playing alongside five-time major winner, Phil Mickelson, and the big-hitting Bryson DeChambeau, world number one McIlroy played near perfectly on his front nine and moved to two-under-par with an eagle on the par-five 13th hole - McIlroy's fourth as his group began on the back nine.

Back-to-back birdies followed as the four-time major winner moved to four under after six, however, McIlroy handed one back on the par three 16th to drop back to three under approaching the turn.

McIlroy's iron play proved exquisite, however, the Holywood native could not capitalise over the next few holes as he missed birdie opportunities.

Another birdie would inevitably arrive and McIlroy's approach to the second green - his 11th hole - left him with a kick-in three on the par four.

McIlroy would maintain the momentum two holes later as he moved to five-under-par, leading the tournament at that stage.

A well-worked up and down on the par-five sixth handed McIlroy his third birdie on the home straight as he moved to six-under. 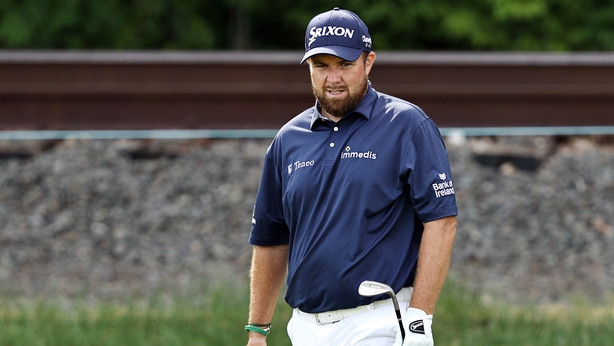 Another missed birdie opportunity - albeit a tough, uphill putt, followed on his 16th, and McIlroy had to settle for par on 17 before finishing his round with another birdie on the par-four ninth.

Just behind McIlroy out on the course, 2019 Open champion Lowry was playing flawless golf, having reached the turn at two-under, having made birdie on the 13th and 15th holes.

The Clara native, also starting on the back nine, proceeded to gain two further shots on the second and third to move right into contention, and then followed McIlroy in for birdie on the sixth to get to five-under with three to play.

However he bogeyed the eighth to get home with an opening four-under-par that still sets himself up nicely for Friday's second round.