Matt Kuchar was not at his best but did enough to maintain the lead in the second round at the Genesis Open on Friday, as Rory McIlroy and Adam Scott loomed large in the rear view mirror in perfect winter conditions in southern California.

On a day when tournament host Tiger Woods frittered away several shots with some poor wedge play and fell nine shots from the lead, Kuchar compiled a respectable two-under-par 69 at Riviera in Los Angeles.

In search of his 10th PGA Tour victory, Kuchar posted a nine-under 133 total and was relieved not to inflict any major damage on himself.

"It definitely wasn't my best stuff today. Certainly glad to be in the clubhouse (with a 69)," the American said after securing a two-shot advantage over Northern Irishman McIlroy (67) and Americans Harold Varner (68) and Wyndham Clark (68).

Australian former world number one Scott shot the lowest score of the day, a bogey-free 64, to join a group three behind. 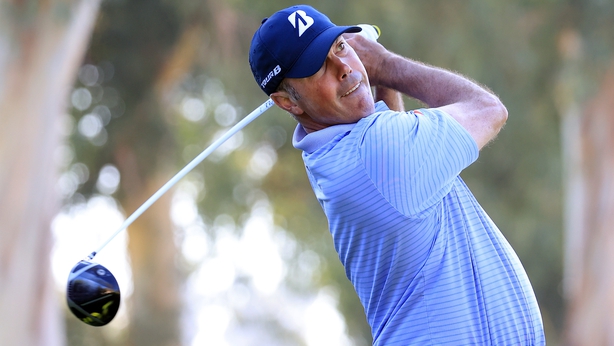 Kuchar (above) acknowledged he would need to sharpen up his game over the weekend to have a realistic chance of winning.

"I've got to drive it better," he said. "Two-under was an awfully good score for the way I drove it today.

"This is a hard golf course. Playing defensive is not much fun. It felt like half the holes I was doing something out of the rough and just trying to find a place where I had a decent shot at just making par."

McIlroy did not quite fire on all cylinders either, but did enough to work his way into equal second place ON seven-under.

"I've hit a couple loose shots here and there, but I'm thinking my way around the golf course and that's what this place is all about," said the world number one.

Further back, Woods has plenty of work to do to have a chance of posting what would be a record 83rd PGA Tour victory, at a tournament where he has never lifted the trophy.

He was livid with some sloppy wedge play that led to a double-bogey at the 15th hole and a bogey at the third.

"I made some bad mistakes out there. Three throwaway shots with wedges is something I rarely ever do," he said after shooting 73, a score that ended a run of 13 consecutive rounds of par or better on the PGA Tour.