JB Holmes shot a six-under 65 to take a one-stroke lead into the third day of the Phoenix Open at TPC Scottsdale.

The 37-year-old American fed off the energy from the crowd on the back nine as he opened with birdies on the 13th, 15th and 16th and an eagle on the 17th.

Despite closing out his opening nine with a bogey on the 18th, Holmes kept his composure to pick up three shots after the turn..

Sitting at 13-under, Holmes heads into Saturday one shot in front of fellow American Wyndham Clark.

After taking the lead with a career-best 61 on Thursday, Clark struggled to maintain that form through day two as he fell to second with a two-under 69.

Holmes last had the halfway lead at The Open in July, sharing it with eventual champion Shane Lowry on that occasion.

He played Friday with medical tape on his right elbow, a joint that has afflicted him for years and which required an in-round massage from his trainer on Thursday.

Second-placed Clark did not quite fire on all cylinders but did his chances little harm.

"I wanted to extend my lead. Unfortunately didn't have my best today," said second-year tour player Clark, adding that he still felt confident with his game. 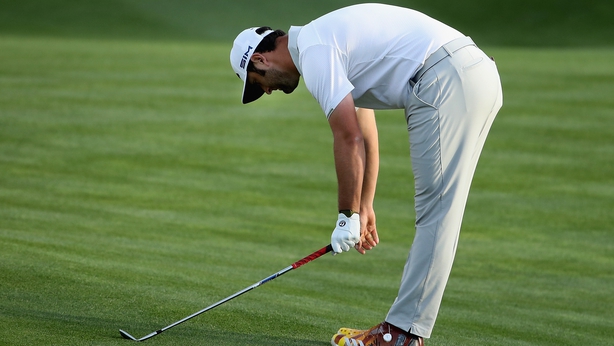 Among the big names, Spanish world number three Jon Rahm (above) had steam coming from his ears after two bogeys in the final three holes left him six shots off the pace in his adopted hometown.

Rahm's poor finish and round of 68 came out of the blue following a run of five straight birdies.

"Could not be an easier finish but to finish two over par on those three holes kind of pisses me off," Rahm said.

"Playing great golf and then an absolutely terrible finish honestly. It's just rough."

Defending champion Rickie Fowler rallied with the day's second best score, shooting 65 to make the cut, though he trailed Holmes by 10 strokes.

But the puzzling decline of former world number one Jordan Spieth continued as the Texan missed the cut with his one-over total.

Spieth has had only two top-10 finishes in the past eight months.

"I really wanted to play the weekend. I had a bunch of buddies come into town and wanted to give them something to watch the next couple of days," said Spieth, who blamed poor putting for his early exit.