Graeme McDowell is two shots off the lead after round two at the Saudi International having held a share of the overnight lead, but the Northern Irishman faces the threat of a slow-play penalty.

The former US Open is within striking distance of new leader Victor Perez, who holds a one shot lead over Gavin Green heading into the weekend.

Shane Lowry is up to a tie for 12th after a 67 lifted the Offaly golfer to four under. However, Cormac Sharvin missed the cut, despite carding a 67.

But an opening round 75 ultimately cost him as he finished on two over par, missing the cut mark by one shot.

Former University of New Mexico college room-mates Perez and Green will form the final group on Saturday after Perez carded a second consecutive 65 to reach 10 under par, with Green nine under following a 67.

While McDowell is a shot further back after a 68, he faces the threat of a slow-play penalty over the weekend after picking up a "bad time".

He took too long over his second shot to the fourth hole, his 13th, after conducting an in-round interview with Sky Sports reporter Tim Barter.

Another transgression in the final two rounds will see McDowell hit with a one-shot penalty, which could be crucial in his bid for a first European Tour win since 2014.

"I just did an interview with Tim Barter so I was 50 yards behind the guys," McDowell told The Scotsman.

"I was first to go and I had 215 yards into the wind. It was a difficult shot.

"Tim is great at his job and I don't want a situation where guys won't give him an interview.

"But I called him over and said, 'You might want to have a word with them' because, if I am going to do that for you, which I want to because we are in the entertainment business and I think it's a good thing for viewers to get an insight into what is happening out on the course, only for the referee to give me a bad time, then everyone is going to say 'no'.

"We don't want that because I think it is bringing a nice dynamic. Listen, we are trying to make this product as fast and as interesting as is possible.

"It's not always the most exciting product in the world, this stuff out here, and I think those on-course interviews are a nice little addition."

Perez, who won the Alfred Dunhill Links Championship last year, said: "I am very pleased with the second round. I think it was important to keep the hammer down after obviously a 65 in the wind yesterday.

"Gavin and I were room-mates in college for four years and we are obviously very close. He played very well yesterday and I'm looking forward to playing together.

"Being on Tour together makes it really easy to catch up.

"He's a great talent and he has been coming up a long time so it's only a matter of time before he breaks through."

Green, who is seeking his maiden European Tour title, added: "Playing with Victor tomorrow I think it will be fun. It's just like college days again.

"I'm excited just to be in the mix. I've been there a couple times and just try to put myself in the position a couple more times and see what happens."
Defending champion Dustin Johnson is five shots off the pace following a 68, with Lowry and Phil Mickelson another stroke back.

World number one Brooks Koepka is nine shots off the lead after a second round of 69. 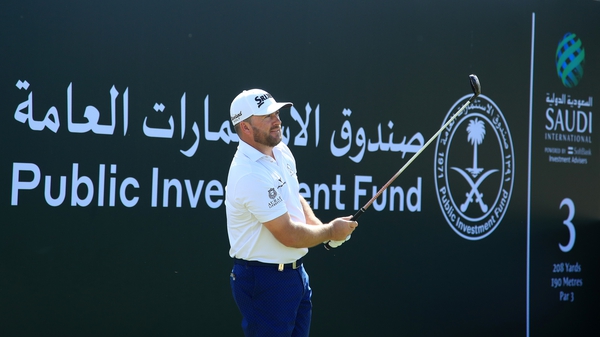