Patrick Reed and Gary Woodland set the first-round pace at the windswept Hero World Challenge in the Bahamas with tournament host Tiger Woods four shots adrift after faltering over the final two holes.

The tournament began a day earlier than usual to accommodate golfers travelling to next week's Presidents Cup in Australia and the field included all but one member of the 12-player U.S. team that will compete at Royal Melbourne.

Woods, a playing captain at the Presidents Cup, reached the turn at two over par but made three birdies and an eagle over a four-hole stretch starting at the 11th to claw back up the leaderboard.

Woods endured a brutal finish, however, when he made bogey at the par-three 17th after he found the front bunker and closed with a three-putt double-bogey from about 12 feet for an even-par 72 that left him in a share of 11th place.

Woodland mixed eight birdies with two bogeys to grab the early clubhouse lead but Reed, playing two groups behind, offset his only bogey with four consecutive birdies from the 13th to join his American compatriot atop the leaderboard.

Defending champion Jon Rahm was four shots back of the co-leaders after mixing four birdies with two bogeys. 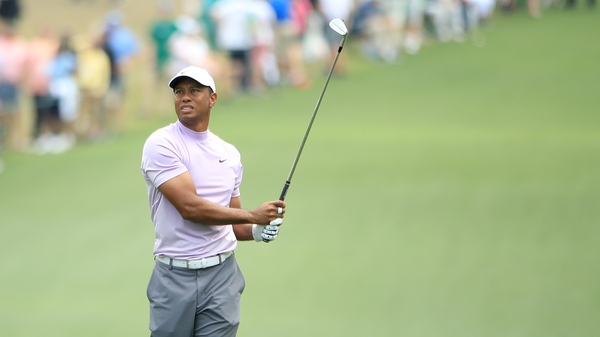