France's Mike Lorenzo-Vera shot a second round of 69 to give himself a three-shot lead at the halfway stage in Dubai with Rory McIlroy six shots behind.

The Frenchman added to his opening round of 63 at Jumeriah Golf Estates to finish at 12 under par for his opening two days of golf, matching the 36-hole record at the event. DP World Tour Championship

Spain's Jon Rahm, the current Irish Open champion, and England's Tommy Fleetwood find themselves three shots back on nine under.

Rory McIlroy is six shots of the lead after posting 74 to follow on from his opening round of 64, a round that included a sensational eagle on the 18th.

The 30-year-old Northern Irishman, who cannot win the Race to Dubai, had described the shot as the best shot he had hit all year but was in a more reflective mood following his second round, "It's a very fickle game," McIlroy said. "I've always said that one day it can seem very easy and someone up there says, no, not so fast, and brings you back down to earth. That's golf. I battled through it."

Shane Lowry is well off the pace on three under despite shooting a 68 on the second day of action.

The Open champion needs to finish at least second and ahead of Rahm, Fleetwood and Wiesberger (also -3), which is looking extremely unlikely, to win the Race to Dubai. 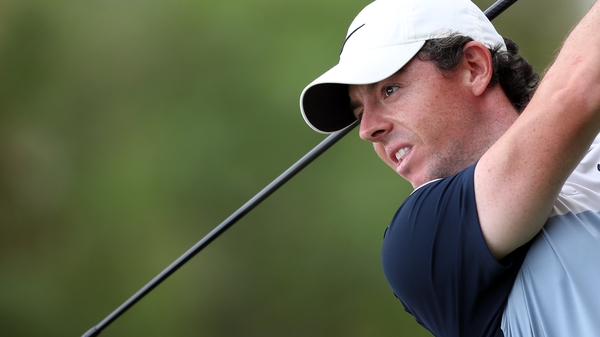 Eagle-eyed McIlroy off to flyer in Dubai Golf