Justin Thomas took command of the BMW Championship with a superb 11-under 61 to shatter the Medinah course record and open up a six-stroke lead heading into the final round.

The American had produced a first-round 65 in Illinois to equal the record along with Jason Kokrak, before Japanese player Hideki Matsuyama then shot an impressive nine-under-par 63 on Friday.

However, while Matsuyama faltered with a bogey-heavy 73 to drop out of contention at 11-under, Thomas signed for a 61 - which included two eagles and could have been even lower but for a dropped shot at the par-four sixth.

The world number 10, USPGA Championship winner two years ago, heads into Sunday at 21-under, with compatriots Tony Finau and Patrick Cantlay in joint second place after their respective 68s.

Slovakian Rory Sabbatini sits at 14-under following a 67, picking up six birdies on the back nine.

Spain's Jon Rham was a big mover after a 66 left him at 13-under, one clear of American Brandt Snedeker, who is in a group on 12-under with Rickie Fowler a stroke further back after a 68.

Tiger Woods, meanwhile, sank five birdies for his 67 after successive rounds of 71 to climb to seven-under.

Rory McIlroy meanwhile couldn't improve on his second round score of 67 with two birdies and four birdies at Medinah and he sits on 10-under par.

Compatriot Graeme McDowell slumped to a 73 and his is on two-under par for the tournament.

World number one Brooks Koepka dropped down the standings after a 72, two bogeys leaving him at five-under overall.

England's Justin Rose shot a 73 and fell back to two-under, but compatriot Paul Casey's 67 saw him climb to nine-under. 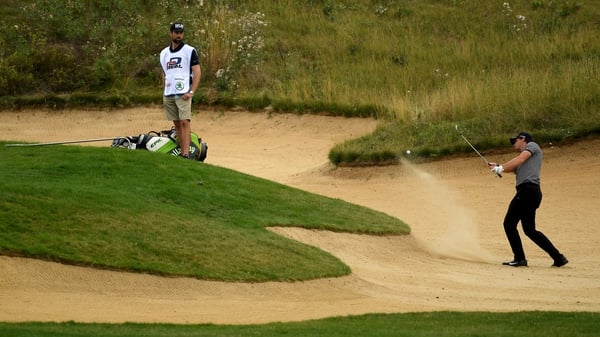