Shane Lowry staved off the biggest nerves of his golfing life and handled difficult conditions to win The Open by six strokes amid emotional scenes at Royal Portrush on Sunday.

Fervently cheered on every shot by the sellout crowd, the 32-year-old from Clara was never seriously troubled in the final round as he carded one-over-par 72 in strong winds and intermittent rain which buffeted the late starters.

"My mum and dad, they sacrificed so much for me when I was younger and I'm so happy I can hand them this trophy tonight," Lowry said as he clutched the Claret Jug, his voice cracking with emotion.

He finished at 15-under 269, while Englishman Tommy Fleetwood, the only player to apply any semblance of pressure on Lowry, shot 74 for second place.

Lowry had teed off with a four-shot lead and as the other contenders fell away it quickly turned into a head-to-head duel between Lowry and Fleetwood.

"I got off to a very shaky start," said Lowry, who had to sink a six-foot putt to salvage bogey at the first.

"I didn't feel great out there. It's probably the most uncomfortable I've ever felt on a golf course. You're trying to win an Open in your home country, it's incredibly difficult."

But once he settled down and looked at a leaderboard he noticed that nobody was making a run at him. He needed to avoid any big numbers on his card and duly did so, making nothing worse than bogey.

Even three straight bogeys around the turn hardly dented his lead, and a six-foot birdie at the 15th hole that extended his margin to six strokes allowed him to almost enjoy a processional victory march up the final three holes.

"It was just so difficult," he said. "I kept telling myself bogeys are not going to hurt you, let's just keep the ball in play and if I make the odd par it will be pretty good.

"It turned into a two-horse race between me and Tommy towards the at the end which was quite nice because I could keep an eye on him."

Lowry savoured the walk up the 18th, greeted as one of their own by the singing gallery who packed the stands.

After hitting his final approach shot he held his arms aloft in celebration and hugged his caddie, assured finally that there would be no late disaster.

He became the second player from south of the border, after Padraig Harrington in 2007 and 2008, to lift the Claret Jug, a fitting end to the first Open played in Northern Ireland since 1951.

Players from Ireland and Northern Ireland have won five of the past 13 Opens, with Darren Clarke (2011) and Rory McIlroy (2014) also hoisting the trophy. 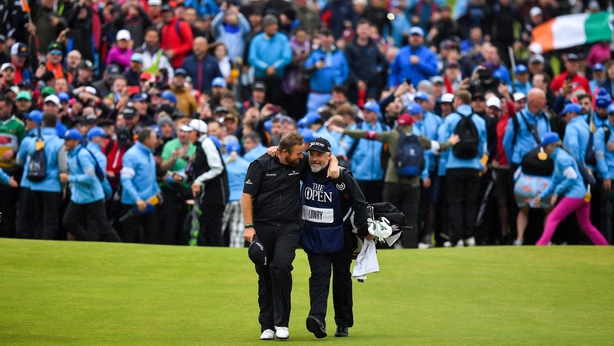 Harrington and 2010 U.S. Open champion Graeme McDowell were among those who greeted Lowry next to the 18th green, while McIlroy, the local favourite who missed the cut, was no doubt cheering from afar.

"We're all one country when it comes to golf," Lowry said. "I said to my caddie (Brian 'Bo' Martin) walking down the last, 'I can't believe this is me, this is mine'."

"I've watched the Open since I was a little kid and to be named champion golfer of the year is just incredible."

"I think a lot of people made the last-minute journey up here this morning because I was leading and it was great out there today.

"It's funny, I sometimes struggle to play in front of the home crowd and have done in the past, but not over the last few days. I played lovely."