McDowell backed friend and compatriot McIlroy to end his five-year major drought - and soon - after the 30-year-old failed to make the cut at The Open on his home course at Royal Portrush.

McIlroy's eight over meltdown in the first round proved a nightmare homecoming as The Open returned to his native Northern Ireland for the first time since 1951.

The four-time major winner hit back to shoot a stunning 65 in Friday's second round, missing the cut by just one shot - and McDowell hailed that resilient rally as proof McIlroy will quickly be back in major-winning business.

"He won't finish on four, he'll win more, I've no doubt in my mind," said McDowell.

"Five years without a major is a huge gap for a man of his capabilities, no doubt about it.

"But people grow up at different rates, so much happens in a man's life, he met his wife, got married.

"Life gets in the way. 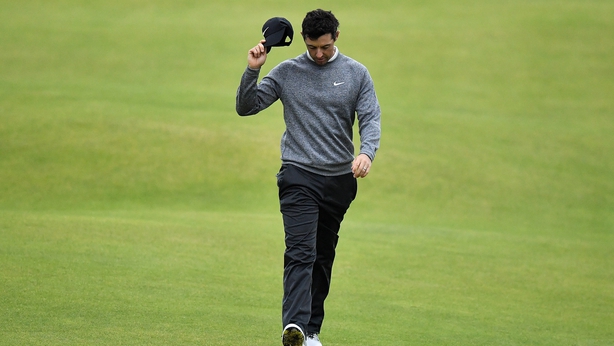 "I feel like he's got through that transition in his life and he's spent this year really trying to get himself settled, become more philosophical. I feel mentally he's settling down and getting back into his rhythm again.

"I'm not making excuses for the guy, five years is a big gap for him.

"But he's still a young man, he's only 30 years old, he's in the shape of his life. Mentally he's in a great place and meanwhile there's a lot of good players out here.

"I've huge belief in him that he'll win soon and he'll win several. Double digits is well within his capabilities.

"But it's a tough ask out here. He'll get unfairly criticised this week for not playing well, but he had a lot of pressure on his shoulders.

"It's very difficult coming home and trying to do what he tried to do this week, with all that pressure and the spotlight."

McIlroy's emotions got the better of him when he realised his rescue mission was in vain on Friday night.

And McDowell insisted it was important fans are able to see their idols open up and reveal some of the strains of elite sport.

"I think Rory won himself a lot of fans, just for reacting in a human way," said McDowell.

"We're not robots, we're humans, and we feel emotion. Golf will test you to the absolute limit like no other sport.

"And I truly believe Rory's in as good a place physically and mentally as I think I've ever seen him.

"This was always going to be a difficult week for him, because he was the shining Irish light coming in here.

"Rory's a megastar, and he was coming in here with the pressure of a nation on his shoulders, and he was always going to feel it more than we did.

"So it obviously meant a huge amount to him.

"Anyone that watched Rory finish yesterday, it was exciting. It was like he was leading the tournament, coming down the stretch.

"He was wearing his heart on his sleeve, really laying it all out there coming in.

"And to watch him break down a little, it felt like it legitimised the tears in my eyes on the tee on Thursday morning.

"I was wondering what was wrong with me then, but when I saw Rory last night I understood that it means a huge amount to us all.

"And for him obviously not to play the way he wants to play, the way he battled coming down the stretch, that shows a lot about him as a person.

"And it's great in sport when we see some emotions sometimes.

"At times these guys look like robots up here, but we're not robots, we hurt and we hurt a lot sometimes, and it's a tough sport."

McDowell birdied the last two holes on Saturday to come in at two under par after three rounds, admitting he wanted to atone at the last after he, McIlroy and Darren Clarke had all previously struggled there.

"The 18th's been pretty cruel to all three Northern Irish lads this week - 7-7-7 is okay if you're on the slots, but not so good if you're on the 18th hole at Portrush, for me, Darren and Rory.

"It was really nice to make birdie there today."