Darren Clarke stroked home a birdie at the fifth to lead The Open like he was knocking balls around in his back garden.

And that is because the 50-year-old was so close to home he could have seen his house had he turned around before sinking that smart putt.

A Dungannon native but Portrush resident, Clarke's house overlooks the fifth at the Dunluce course.

Clarke may have tapped home countless birdies on Royal Portrush's 'White Rocks' par three, but never before to step ahead of the pack in an Open Championship.

"I didn't think I would feel the way I did, but the support, the crowd, everything about it, I just thought 'wow, it's The Open Championship'," said a tearful Clarke, who finished with an admirable level par.

"We're back here in Portrush, and it was amazing."

A 'Go Darren' banner hung from the balcony of one of the houses lower down the outcrop than Clarke's sprawling pad. A pair of fans leaned over the railing and drooled as their doyen delivered on the fifth.

The 2011 Open champion had the huge honour of teeing off the 2019 edition, the tournament's historic return to Northern Ireland for the first time in 68 years. 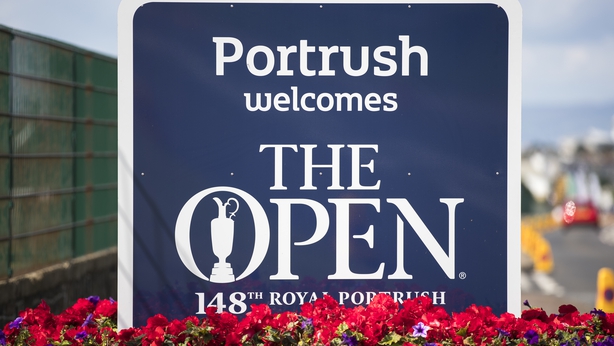 So, on 18 July, 2019 at 6:35am, the four-time Ryder Cup champion ripped through his ball to drive Northern Ireland onto the global sporting stage.

"This was really special; the last time I had people shouting like that was 2011 on the 72nd hole, so it was fabulous," said Clarke.

"The Open being here isn't about us, it's about how far our country has moved forward, it's about the economic benefits that the legacy will bring.

"Look back 20 years and we wouldn't have been having this conversation.

"Maybe not up here, but you'd have seen police everywhere on the street.

"The stands are full, you can't get a ticket.

"Hopefully the people who make decisions for big sporting events can take a look at this and look upon us favourably here in Northern Ireland and Ireland."

Clarke started the day as a 600/1 shot to lift the claret jug for the second time.

That he led the field until the 14th underscored the back-yard buoyancy of contesting a major on home turf.

His eventual level par certainly justified his honour of leading off the tournament.

The king of the hill with the everyman touch, when Clarke took to the tee at the first, the packed grandstand roared its approval.

"Now I'm going to go home and do what I used to do, which is just sit there and watch it all afternoon, like any sports fan would."

That wall of noise carried him to an immediate birdie, a feat he repeated on the third and then that fitting fifth.

When a glorious rainbow broke out across the seventh, with Clarke teeing off in front of the North Atlantic, there were almost too many good omens.

And so it proved, as all there was at the end of that trick of the light was a bogey six.

"I just got a little carried away; I should have just played the easier shot, hit it up and let the wind move it to the right," said Clarke.

"The first hour was great, I'd played nicely and then after that stupid bogey I got a little bit defensive almost."
That dream start became a bit of a battle, and yet despite three back-nine bogeys this remained an admirable first round.

A packed grandstand bellowed approval as he signed off at the 18th on an unforgettable day.

Minor frustrations in ceding late ground will doubtless fade in time, as he starts to appreciate his small part in national history - once he has taken in what he can on the TV, mind you.

He added: "Now I'm going to go home and do what I used to do, which is just sit there and watch it all afternoon, like any sports fan would."