Open champion Francesco Molinari is happy to arrive at Royal Portrush under the radar as he begins the defence of his title.

The Italian is the most unassuming winner since Zach Johnson in 2015 and despite his Ryder Cup heroics probably has the lowest public profile since Louis Oosthuizen nine years ago.

However, rather unlike Brooks Koepka, who was outspoken about the lack of respect he was given just before winning his fourth major in May, Molinari is happier not being in the headlines.

"Maybe part of it is my personality, not really caring too much about being in the spotlight," said the 36-year-old, who has cemented his place in the world's top 10 since his maiden major victory at Carnoustie.

"Part of it is being Italian. An American or British player is always going to naturally get more attention.

"I don't mind that, it can only be good for myself as there is a little less pressure from the outside. I don't mind it at all.

"I enjoy the support of the crowds and at something like the Ryder Cup last year wouldn't have been the same without the involvement of the crowd.

"Walking through the station in Paris (the day after winning back the trophy) that stays with you forever and you never forget.

"I enjoy my time on the range and the course, preparing, and one of the challenges for me has been to balance the more time doing other stuff as it is less time preparing or with your family.

"Family comes first and then I feel like I need to work hard to perform at a high level.

"It is never going to be you get all the results and no attention, it is about finding the right balance but for me it is about less attention than the other guys." 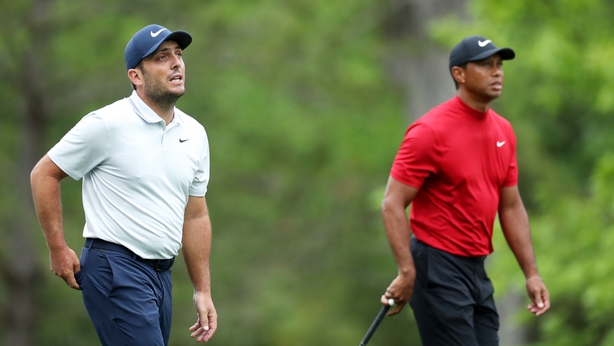 Molinari could have arrived in Portrush as a two-time major winner had things gone better for him at Augusta where he led the Masters going into the final day and was two clear with seven holes remaining only to collapse and hand victory to Tiger Woods.

It was a chastening experience for the likeable Italian, who found the water twice on the back nine.

"In some ways (having already won a major) might have made the disappointment a little bit bigger: at that time I wasn't able to close it out," he said.

"But to be honest I don't think it would've changed a lot. In any sport it is never easy to take a loss like that.

"But you try to analyse what happened and try to move on and ideally put yourself in that position again as soon as possible to prove you can do better than you did that time."

Molinari's only other appearance at Portrush was in the 2012 Irish Open where he finished in a tie for 10th.

The atmosphere, rather than his performance, is what stuck in his mind from that trip when he played with Portrush resident and then defending Open champion Darren Clarke.

He expects it to be even better as the Open returns to the course for the first time since 1951 with Rory McIlroy and fellow Northern Irishman and Portrush-born Graeme McDowell the home favourites.

"I remember the first hole: people both sides of the fairway all the way to the green, rows of people. I guess it will be similar for Rory and GMac," he said.

"I think with the Open not being there for so many years it will be a great atmosphere for everyone.

"For the Irish people to have the Open back they'll enjoy every single moment of it."