Rory McIlroy was pleasantly surprised to feel right at home at Royal Portrush after reacquainting himself with the venue for next week's Open Championship.

McIlroy set the course record at Portrush with a 61 in the North of Ireland Championship as a 16-year-old, although the layout has since been changed, with the previous 17th and 18th holes removed and two new ones built into the middle of the round.

Large grandstands have also been erected to house some of the 43,750 spectators who will attend each championship day as the Open returns to Northern Ireland for the first time since 1951.

"I expected it to feel different than it did. It still just feels like Portrush to me," McIlroy said of his practice round on Saturday.

"Yes, the stands are up and it looks fantastic, but it's still the same golf course. I haven't played it much over the last few years. We played the Irish Open there in 2012. I played the new holes in 2017 and played 18 holes in October.

"When I got on the first tee, everything sort of started coming back to me; on the second tee, I aim it at the brown house. It felt like just the same old golf course that I grew up playing and it was nice.

"I had not seen my mum in three months and I made arrangements to go to dinner with them and I said, can we have it about 8.00 because I don't know how much time I'm going to have to spend at Portrush.

"And I ended up moving the dinner forward because I didn't need to spend as much as time as I thought I did, which I guess is a comforting thing in a way. It was great to see it. It's been a long time in the making and obviously everyone over there is so excited for next week."

McIlroy and Portrush native Graeme McDowell will be the centre of attention on home soil, but McIlroy is taking great confidence from his recent Open record as he tries to lift the Claret Jug for a second time and end a five-year major drought.

"It's the same golf course I've grown up playing my whole life, and it's the same tournament that I haven't finished outside the top five for the last few years," McIlroy added. 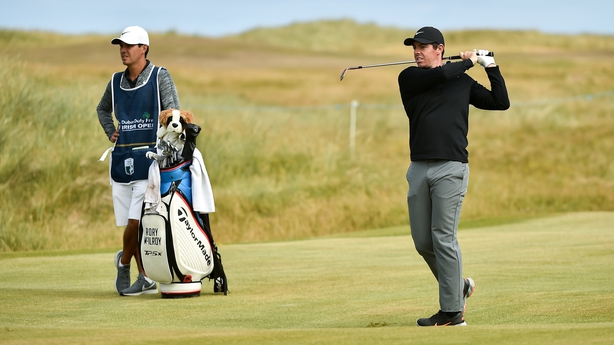 McIlroy opted against competing in the Irish Open last week - a tournament he hosted for the previous four years - in favour of contesting the ASI Scottish Open at the Renaissance Club and insists he is not simply preparing for Portrush.

"As much as these weeks set you up for the week after, I'm playing with this event with two eyes firmly focused on the Scottish Open," added the 30-year-old, who has never won a tournament in Scotland. "It's not as if I'm trying to replicate shots or different things here that I might be doing in Portrush.

"First and foremost I want to play well here. I want to get myself into contention and have a chance to win a golf tournament. I think if I do that, that's the best way to prepare for next week. Feel the heat of getting in there on Sunday and trying to play some good golf.

"I think it's a little disrespectful when people come in and they are treating it as a warm-up. I think most tournaments deserve to stand on their own two feet and have some stature, and the Scottish Open is one of these events on the European Tour.

"It's a big event. A lot of prize money, a lot of points. So it deserves to stand-alone and not just be this tournament that's attached on to the week after. I'm fully focused on getting out there and playing well this week and trying to get myself in the mix."

Follow the Open Golf Championshop from Royal Portrush with our live blog on RTÉ Sport Online and the RTÉ News Now App from 18-21 July.