Justin Rose believes he will need to find an extra gear over the weekend to claim a second US Open title as Rory McIlroy plotted a "boring" path to glory at Pebble Beach.

Rose carded a second round of 70 to post consecutive sub-par scores in the tournament for the first time in his career and set a clubhouse target which was only overtaken late in the day by American Gary Woodland.

Woodland's flawless 65 matched the lowest score in a US Open at Pebble Beach, which was set by Tiger Woods on his way to a record 15-shot victory in 2000 and equalled by Rose on Thursday.

At nine under par, Woodland led by two shots from Rose, with former Open champion Louis Oosthuizen on six under and McIlroy a shot further back alongside American Aaron Wise after veering from the sublime to the ridiculous and back again in his 69.

Round 2 at the U.S. Open is complete.

Defending champion Brooks Koepka, who is seeking a hat-trick of US Open titles and a fifth major victory in his last nine starts, was ominously placed on four under in a group which also contained England's Matt Wallace, who was third in the US PGA Championship behind Koepka last month.

Graeme McDowell, who lifted the trophy at Pebble Beach in 2010, is three under par after a round of 70, with Masters champion Tiger Woods nine strokes off the pace following a disappointing 72.

Shane Lowry, meanwhile, carded a round of 69 to get to two over par and make the cut by one stroke. 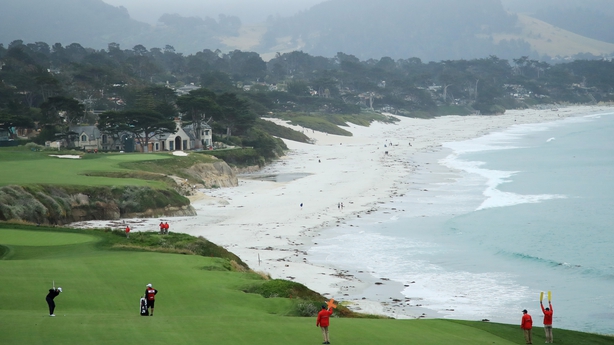 McIlroy was three under for his round after 12 holes before dropping a shot on the 13th and then running up a double bogey on the par-five 14th after spinning his approach off the green and dumping his next shot into a bunker.

The 30-year-old was understandably furious and could still be seen muttering to himself even after making amends with a birdie on the 15th, but his mood was improved considerably by another birdie on the next.

"It was a bit of an unforced error on 14, I took a club that was not going to get to the back third of the green even after seeing other players do the same," McIlroy said.

"But I bounced back well and those birdies on 15 and 16 were huge to get me right back into this golf tournament this weekend.

"It's boring and a cliche but you need to hit fairways and greens round here. I did not do that for a few holes on the back nine and paid the price and was lucky to bounce back."

Rose, who started from the 10th and went out in 34 after birdies on 15 and 18, said: "I'm happy although I felt like it was an opportunity to go a couple better.

"I felt like I left two or three out there coming in but parring eight and nine at least makes me feel like I've got something out of the day.

"I have no expectations for the weekend really. I just like my position, the course and the way I'm trending but I still don't feel like I'm cooking and I'm going to need to find that (extra) gear if I'm going to hoist some silverware on the weekend."

Koepka could also reflect on a number of missed opportunities but remained well placed to maintain his remarkable recent record in majors and join Scotland's Willie Anderson (1903-05) as the only player to win three straight US Opens.

??? ?? ??@McIlroyRory takes the scenic route to birdie on No. 15.pic.twitter.com/XXsdY7qeyt

"I'm good at this patient game, I know you just need to be hanging around on the weekend," Koepka said. "I have a chance, just have to clean it up for the weekend. If I can putt the way I did on Thursday and hit it like I did today, it's a good combination."

Woods, who single-putted 11 greens in an opening round of 70, was on course for his first bogey-free round in any US Open since his final round here in 2000 after one birdie and 15 pars, but bogeyed his last two holes.

The cut fell at two over par and Wales's Rhys Enoch made it right on the mark thanks to a superb second round of 66.