Brooks Koepka is not exactly short of motivation as he aims to complete a rare hat-trick of US Open victories and claim a fifth major title in just nine appearances.

But the world number one has a fresh chip on his shoulder at Pebble Beach after a blink-and-you'll-miss-it appearance in a television advert promoting the season's third major championship.

A trailer for the American host broadcaster Fox features images from Jack Nicklaus's victory at Pebble Beach in 1972, Tom Watson's 10 years later and a shot from Tiger Woods in 2010, the year he finished fourth behind Northern Ireland's Graeme McDowell.

Jason Day, Rickie Fowler and six-time runner-up Phil Mickelson are also pictured, while Koepka is seen briefly at the end of the 30-second clip and is not mentioned by name.

He features in three other promos for the tournament by the broadcaster.

Asked where the chip on his shoulder comes from, Koepka said: "I think a very little bit of it was me putting it on there.

"But I think a lot of it just comes from certain things. There's a commercial running now where I'm not even in it and FOX put it up for a preview of the US Open.

"I wasn't on the list of notables (on day one of the 2018 US Open) after winning it the year before. There's a couple of things where it's just mind boggling...it's like, really? Like, how do you forget that?

"I actually didn't see (the advert) for a long time. A bunch of people on Twitter tagged me in it and I guess were amazed that I wasn't in it. I was just kind of shocked. They've had over a year to kind of put it out.

"Somebody probably got fired over it - or should." 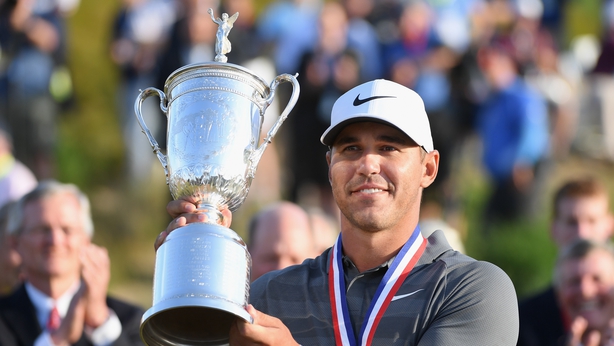 Koepka has also had a well-publicised spat with Golf Channel analyst Brandel Chamblee after the former player labelled Koepka's weight-loss earlier this year as the "most reckless self-sabotage that I have ever seen of an athlete in his prime".

And the 29-year-old pointedly left out Chamblee's name when admitting he does watch the Golf Channel after tournament rounds "to see what Frank (Nobilo) and David (Duval) and Rich (Lerner) are talking about".

But it is an approach which has undoubtedly achieved incredible results, with Koepka winning the US Open in 2017 and 2018 and also claiming back-to-back US PGA titles in the last two seasons.

"It would be the coolest thing ever to win three US Opens in a row with the third one at Pebble," said Koepka, who would be only the second player after Scotland's Willie Anderson (1903-05) to achieve the feat.

"As a kid you always wanted to win a US Open at Pebble. It's kind of a dream come true, in a sense. And to even be thought of or to think of winning a major championship here would be incredible.

"You look at the guys that have won here and they are some of the greatest players to have played the game."

The US Open has been beset by problems in recent years and the USGA admitted they went "too far" with the set-up of Shinnecock Hills last year after only three players broke par in a third round during which Phil Mickelson was penalised two shots for hitting a moving ball as it rolled off the 13th green.

However, no-one will hear Koepka complaining about the conditions, despite the thick rough and narrow fairways which typify the US Open.

"Everybody has got to play the same golf course so it really doesn't make a difference," Koepka added. "If you put it in the fairway and you hit every green, there's really no problem, is there?

"I've just been never one to complain, make excuses. It doesn't matter. Nobody wants to hear anybody's excuse. I find it annoying even when I play with guys and they're dropping clubs or throwing them or complaining, like telling me how bad the golf course is or how bad this is.

"I don't want to hear it. I don't care. It doesn't matter to me. It's just something we've all got to deal with. If you play good enough, you shouldn't have a problem."