Brooks Koepka admitted he was "emotionally spent" after surviving an unexpectedly nerve-racking final round to defend his US PGA Championship title and claim a remarkable fourth major victory in his last eight starts.

Koepka had followed a course record of 63 on Thursday with a 65 to set the lowest halfway total in major championship history and took a tournament-record seven-shot lead into the last day at a blustery Bethpage.

No player has ever surrendered such a lead in a major after 54 holes and the 29-year-old remained six clear with eight to play, but bogeyed the next four holes to allow good friend Dustin Johnson to close within a single shot.

However, with the raucous New York crowd now chanting his name, Johnson dropped shots on the 16th and 17th to give Koepka the breathing space he so desperately needed and a closing 74 - the highest final round by a major winner in 15 years - was good enough for a two-shot victory.

England's Matt Wallace was four shots further back in a share of third place with Jordan Spieth and Patrick Cantlay, with Irish men Rory McIlroy and Shane Lowry among a tie for eighth on one over.

"This one's definitely at the top of the list in how emotionally spent I am and how mentally spent I am," Koepka said. "I'm just glad we didn't have to play any more holes, that was a stressful round of golf.

"The wind was up, DJ (Johnson) played awesome and he put the pressure on. I'm glad to have this thing (the Wanamaker Trophy) back in my hands.

"It's incredible. I don't even know if I dreamed of this. This is cool. I am still in shock right now, this is awesome."

Koepka will replace Johnson as world number one on Monday and with the US PGA moving from August to May this year, he is the first player to hold back-to-back titles in two majors at the same time following his US Open wins in 2017 and 2018.

Birdies on the fourth, sixth and ninth had seen Johnson reduce his deficit to four shots, but with his Ryder Cup team-mate about to drop a shot on the 11th, Koepka struck what looked to be the killer blow with a stunning approach to the 10th to set up a tap-in birdie and restore a six-stroke cushion.

However, Koepka then had to hole from six feet on the next to drop just one shot and after further bogeys on the 12th and 13th, his lead was just two as Johnson holed from 11 feet for birdie on the 15th.

Koepka's mind was scrambled by this point and his tee shot on the 14th flew fully 15 yards over the green as a combination of adrenaline and a possible drop in the wind struck at the most inopportune moment.

A fourth bogey in a row meant Koepka's lead was down to one. By this stage, the raucous New York crowd were firmly on Johnson's side and were chanting "DJ, DJ" but Johnson would drop shots on the 16th and 17th to leave Koepka to seal a hard-fought victory. 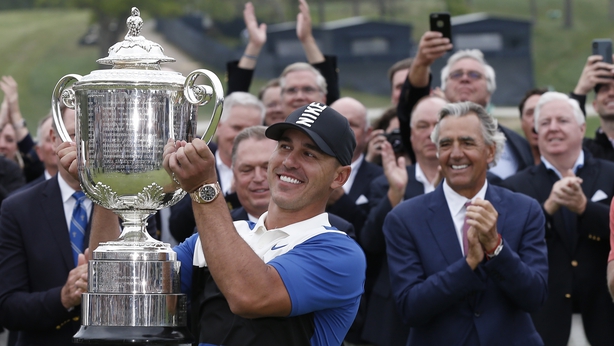 "It's New York. What do you expect when you're half-choking it away?" Koepka said with a smile.

"I think I kind of deserved it. You're going to rattle off four (bogeys) in a row and it looks like you're going to lose it... I've been to sporting events in New York. I know how it goes.

"I think it actually helped. It was at a perfect time because I was just thinking, OK, all right. I've got everybody against me. Let's go."

Koepka steadied the ship with vital pars on the tough 15th and 16th holes and eventually signed for a closing 74 - the highest final round by a major winner in 15 years - and a two-shot victory.

The 29-year-old will replace Johnson as world number one on Monday and with the US PGA moving from August to May this year, he is the first player to hold back-to-back titles in two majors at the same time following his US Open wins in 2017 and 2018.

"Phenomenal. I think that's a good word," Koepka said when asked to sum up his recent form in major championships.

"It's super enjoyable and I'll just try to ride that momentum going into Pebble (Beach, venue for the US Open). I mean four of eight (majors), I like the way that sounds."

After finishing runner-up in the Masters last month, Johnson has now finished second in all four majors in his career with his sole success coming in the 2016 US Open.

"Just the last three holes is what got me," Johnson said. "Standing on the 16th fairway I'm at eight under and hit two really good shots there on 16, and I still don't know how my ball went over the green there.

"But I'm pleased with where the game's at. Especially we've still got a lot of big tournaments left this year. I'm very happy with that."