Brooks Koepka is in a supremely commanding position as he seeks to retain the PGA Championship at Bethpage Black after a second round of 65 left him a whopping seven strokes clear of the field.

The world No. 3, on an amazing hot streak in major championships since his first US Open win in 2017, gave warning of his form on Thursday with a stunning round of 63, one untainted by dropped strokes.

The defending champion wasn't quite so metronomically consistent on Friday, carding bogeys on the 10th and the 17th, but otherwise the birdies kept coming.

Three of them arrived in the first four holes as the gap at the head of the field quickly turned into a chasm.

Koepka. indeed, had opened up a big lead even before he teed off on Friday with early starter Danny Lee, one shot behind at the beginning of the day, carding a four over par round to drop off the pace.

The American's momentum slowed somewhat after that but it picked up once more on the inward nine, with birdies on the 13th, 15th, 16th and the 18th leaving him in a dominant position heading into the weekend.

At 12 under par the 29-year-old enjoyed a seven-shot lead over Spieth and Adam Scott, surpassing the previous biggest 36-hole lead in tournament history of five shots set by Nick Price in 1994. 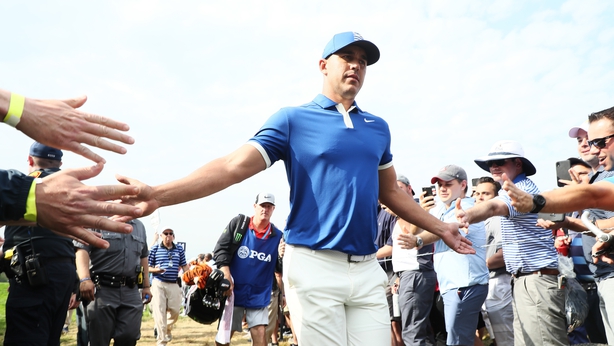 It was all very different for his playing partner Tiger Woods, whose wayward driving saw him miss the four over par cut mark by a single stroke.

Woods has happy memories of Bethpage, having won his second US Open title at the venue in 2002, but even the support of a boisterous Long Island gallery could not lift Woods, who putted poorly in the first round and drove the ball badly in the second.

He perhaps paid the price for not playing a tournament between the Masters and PGA, and for only getting in nine holes at Bethpage in practice this week.

The 43-year-old had planned to play a further nine holes on Wednesday, but did not do so after feeling under the weather.

"I've enjoyed being the Masters champion again and the PGA was a quick turnaround," Woods said after signing for a total 17 strokes more than leader Brooks Koepka.

"Unfortunately I just didn't play well, didn't do all the little things I needed to do correctly to post good scores and put myself in position to shoot good scores."

At the top of the leaderboard, Koepka's pursuers found it difficult to keep pace.

2013 Masters champion Adam Scott gave chase but was starting from a weak position on one over par. The Aussie was in scintillating form with the putter, birdieing seven of the first 14 holes, and appeared on course for a tilt at all time major championship low round record of 61.

However, his momentum ebbed away and a poor three-putt on 17 leaves tied-2nd on five under par. Joining him on five under par is Jordan Spieth, seeking not only a career grand slam, but a first tournament win since the Open Championship in July 2017. Spieth finished his round strongly, carding four birdies on his inward nine for a round of 69.

Three Irish players will be around for the weekend but all are currently over par.

Following an "horrendous" start, Rory McIlroy appeared certain to miss the cut until a stunning final six holes rescued the situation for him.

McIlroy limped to the turn in 40 after starting his round double bogey, bogey, double bogey, but the four-time major winner produced a hat-trick of birdies from the fourth and picked up another shot on the eighth. The resulting 71 left McIlroy on three over par.

Shane Lowry will also tee off on Saturday and Sunday after an impressive round of 69 saw him scrape inside the cut mark.

Lowry was hugely consistent throughout his second round but his first and only bogey of the round, carded on the 16th, at a time when the projected cut mark still stood at three over par, appeared to doom his chances.

However, he bounced back with a timely birdie on the par-3 17th hole. Scores elsewhere fell his way and the cut mark was pushed out to four over par.

Graeme McDowell also guaranteed his presence for the weekend in rather less dramatic fashion, his round of 72 leaving him at two over par for the tournament.

Elsehwere, American David Lipsky made the halfway cut on his debut in the US PGA Championship, despite being penalised two shots for being late for his tee time.

Lipsky was due to tee off at 1243 local time (1743 BST) on Friday in a group also containing former Open champion Henrik Stenson and South Africa's Richard Sterne.

Tournament officials said the 30-year-old was walking toward the tee with his putter and a ball but was "not within the area defined as the starting point" in time.

Lipsky's birdie at the first therefore became a bogey five and he also bogeyed the last three holes, but made the cut on the mark of four over.

If he had been more than five minutes late, he would have been disqualified.