Rory McIlroy staged a superb fightback from an "horrendous" start to make the halfway cut in the US PGA Championship, but Padraig Harrington will not feature this weekend.

McIlroy limped to the turn in 40 after starting his round double bogey, bogey, double bogey, but the four-time major winner produced a hat-trick of birdies from the fourth and picked up another shot on the eighth.

The resulting 71 left McIlroy on the early projected cut of three over and with the wind forecast to pick for the later starters, almost certainly safely through to the weekend.

"I just needed to see one putt to go in, to see something hit the bottom of the hole and that was on the fourth," McIlroy said. "From there I started to play some good golf.

"I had an horrendous start, five over after three, but came back well and the goal after those three holes was to be here for the weekend and it looks like I have done that, which is nice."

Harrington followed yesterday’s 75 with a 77, and finished on a disappointing 12-over par.

Later in the day, both Graeme McDowell and Shane Lowry made the cu, ensuring three Irish players have successfully booked their tee times for the weekend. Lowry was hugely consistent throughout his second round but his first and only bogey of the round, carded on the 16th, at a time when the projected cut mark still stood at three over par, appeared to doom his chances.

However, he bounced back with a timely birdie on the par-3 17th hole. Scores elsewhere fell his way and the cut mark was pushed out to four over par.

Graeme McDowell also guaranteed his presence for the weekend in rather less dramatic fashion, his round of 72 leaving him at two over par for the tournament. 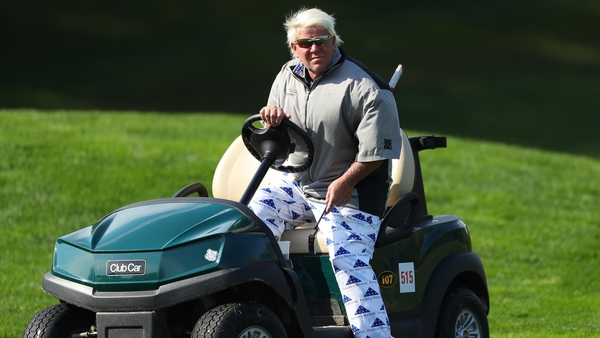