A 63 sees Denny McCarthy top the leaderboard after the first round of the AT&T Byron Nelson, while Seamus Power and Padraig Harrington are battling to make the cut in Dallas

American McCarthy had a shaky start in Texas and carded a double bogey on the par-four fourth before stringing together four birdies to reach the turn two-under.

He went on to pick up six shots on the back nine to go eight-under and lead by one shot from Tyler Duncan and Tom Hoge.

The current cut line for the weekend is two-under par, which is exactly where Harrington finds himself after a mixed round. A birdie at the first was the start of an impressive front nine, picking up another birdie and an eagle at the par-five seventh hole. However a double bogey at 11 and a dropped shot at the 17th sees the Dubliner in a share for 55th place.

Power is facing an uphill task to make the weekend after an opening round 72, three shots further adrift of Harrington.

Masters runner-up Brooks Koepka, looking to defend his US PGA Championship next week, is among 11 players to have carded a 65.

After a blemish-free first nine holes on the back nine, the American mixed three birdies with two bogeys on his final five holes to finish six-under.

Scotland's Martin Laird is tied for 22nd on four-under, while compatriot Russell Knox is a shot further behind and tied for 36th. 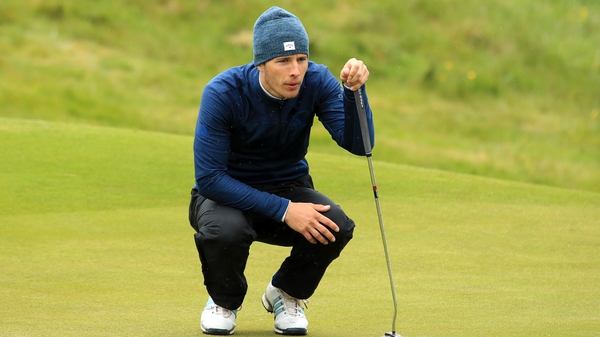 Hoey best of the Irish as Jordan shoots course-record 63