Augusta National opens its hallowed grounds to the public for the Masters each year but anyone trying to learn about the finer details of the exclusive club can expect to be met with a CIA-level of secrecy.

Everything from revenue at the club's massive merchandise store, where a seemingly never-ending line snakes through the doors all week, to the attendance figures at the year's first major are considered classified information at Augusta National.

Even seemingly unobtrusive requests to interview the head groundskeeper of the immaculate course or the person who dry cleans the coveted Green Jackets worn by all Masters champions and club members are all politely declined.

"It's Augusta, you just don't ask too many questions," former world number one Dustin Johnson, who is a favourite to win a maiden Green Jacket this week, said when asked about the club's impenetrable cloak of secrecy.

Affectionately regarded as the 'Cathedral of Pines', the 7,475-yard Augusta National layout is one of the most famous golf courses in the world and the only permanent venue for any of the sport's four majors.

From Magnolia Lane, a tree-lined drive that members use to enter the grounds, to Amen Corner, which may just be golf's most famous stretch of holes, Augusta National has become a place all golfers dream of seeing once before they die. Patrons at the Masters can easily find themselves walking the course alongside a member but they will be hard-pressed to get any of those wearing Green Jackets to open up about one of the more exclusive clubs on the planet.

"That adds to the mystique of it and the fact that also the world's best players throughout history absolutely love coming back here and with this event and this week in particular that's what makes it a lot of fun."

The club's level of secrecy also extends to any plans it may or may not have to amend its grounds or the surrounding areas.

One local news station, which cited plans filed with the city, reported in February that Augusta National has begun a project to tunnel under a road that runs alongside the course, but for what purpose is anyone's guess.

"This is Augusta National, the Masters is a tournament they host and give us the privilege to play," said 2007 Masters champion Zach Johnson. "This is a private institution. It's private and they can do whatever the heck they want."

When it comes to the Masters tradition is everything, and with that comes a strict list of rules that, if violated, could result in the offender being escorted from the course.

As much as Augusta National is renowned for its beauty, it is also known as a place where patrons are not allowed to run or take photos during the tournament. Perhaps the biggest no-no, one that is strictly enforced, is the use of mobile phones. 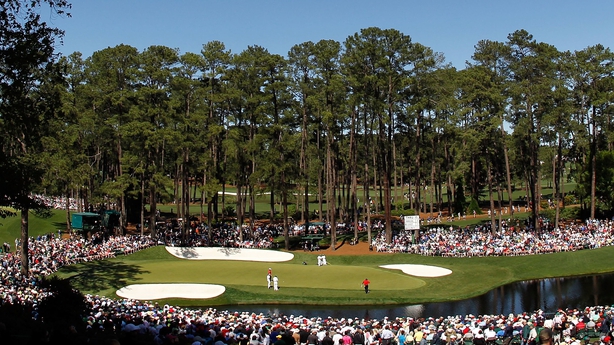 Spain's twice Masters champion Jose Maria Olazabal was very clear when asked about the club's strict policies and desire to keep its dealings private from outsiders.

"I can say I feel comfortable with that. Period."

Like all Masters champions, fellow Spaniard Sergio Garcia became an honorary member with his triumph in 2017, a win that perhaps afforded him a sneak peak behind the mystique spawned by the secrecy that surrounds the club.

For Garcia, Augusta National's combination of exclusivity and secrecy are easily part of what makes it so special.

"If you say or you show everything that you have obviously it's not quite the same," said Garcia. "But it's amazing to be a part of this amazing family and this iconic club and I'm very thankful for it."