Rory McIlroy believes it is just a "matter of time" before Tommy Fleetwood wins his maiden PGA Tour title after his Ryder Cup team-mate claimed a share of the lead on day one of the Players Championship at Sawgrass.

Fleetwood birdied six of his last nine holes in an inward half of 30, just one shot outside the tournament record, to set an imposing clubhouse target of seven under par which was matched only by former US PGA champion Keegan Bradley.

Korea's Ben An and American Brian Harman are a shot off the lead on six under, with Rory McIlroy, Vaughn Taylor and Ryan Moore a stroke further back, Moore's 67 including a spectacular hole-in-one on the iconic par-three 17th.

McIlroy's good early-season form continued with a bogey-free round while Tiger Woods is two under par following an erratic 70 which included six birdies, four bogeys and just one par on the back nine.

Fleetwood started from the 10th and managed just one birdie in his first nine holes, but then picked up shots on the first, second and fifth and finished with a hat-trick of birdies from the seventh.

"I played really well all day apart from I hit a poor tee shot on 14 and got away with it," Fleetwood told Sky Sports.

"And then on 16, the par five, I hit a poor second and I was a bit frustrated at that point because I had a lot of chances from 15 feet and didn't make any. It just shows you, stay patient and things can happen.

"The course doesn't make you feel very comfortable at all, you are always a semi-bad shot from struggling to make par. It's one of the courses that's the ultimate test in golf.

"I've played well here in the past and if I drive it well that's a massive key for me. Driving is a strength for me normally and if you put it in play all the time in general you have a big advantage."

Fleetwood finished seventh at Sawgrass last year and third in the Arnold Palmer Invitational on Sunday, when Ryder Cup partner Francesco Molinari stormed through the field with a closing 64 to win his second PGA Tour title.

"I'm trying to keep up," Fleetwood joked. "It's hard these days but I'm trying my best. It's clearly the next step for me to win over here but winning's not easy and I've got to keep plodding away, do the right things and focus on myself.

"It's a good time to be coming into form. It's been different this year because I've been used to starting so fast but I feel like I've been doing a lot of good things and sometimes you just need a rhythm of shooting good scores and that seems like it's coming."

McIlroy has no doubt Fleetwood will taste victory in the United States sooner rather than later, adding: "He is one of the best players in the world, and he's had his chances already. So, yes, I think it's only a matter of time for sure."

McIlroy was frustrated not to birdie the par-five ninth, his final hole, after his approach hit a sprinkler head and flew over the green into the crowd, but he was happy to find that the change in date from May to March meant the conditions were more conducive to aggressive play.

"Over the last 10 years it's been irons off tees and really trying to plot your way around the golf course, I hit drivers on holes today where I would never have the last few years," McIlroy, who has finished in the top six in all five starts in 2019, told reporters.

"Even when you are aggressive and you miss, it's a touch easier to get yourself back into position. The rough isn't as long or as gnarly and when you miss the greens you are not having to contend with that Bermuda (grass) and guess how it's going to come out." 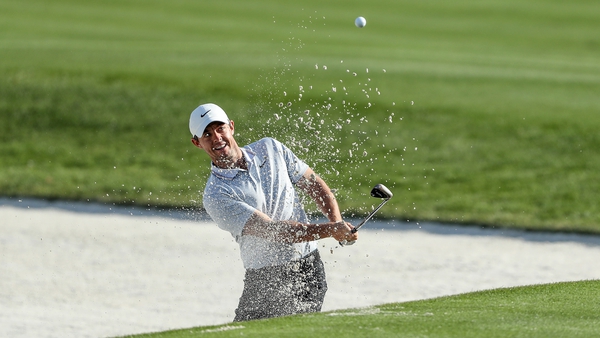 McIlroy in the mix at the Players