A second round of 70 from Graeme McDowell leaves him five shots off the pace before play was suspended at the AT&T Pebble Beach Pro-Am in California.

Playing at Monterey Peninsula Course, McDowell carded three birdies in his round. It wasn't such a  good day, however for Shane Lowry after a 77 dropped him back to four over.

Paul Casey fired a seven-under par 64 to take a share of the lead before the suspension.

Playing on Monterey, Casey got to 10 under and joined five-time major champion Phil Mickelson, Lucas Glover, and first-round leader Scott Langley at the top of the leaderboard.

The Englishman produced a blemish-free round, picking up five birdies and an eagle on the par-five 16th, after a first-round 69 at Pebble Beach. 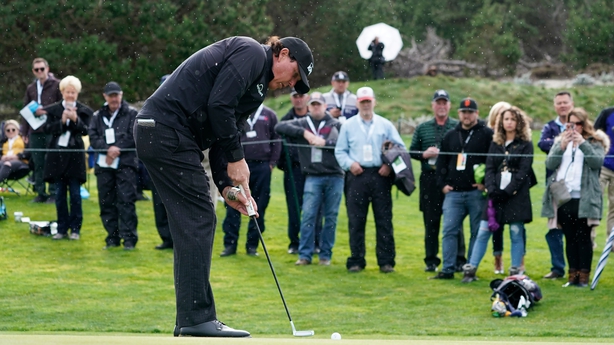 Mickelson, starting on the back nine at Spyglass Hill, shot a 68 and closed out with a birdie on the par-four ninth after a run of three bogeys.

Former world number one and three-time major winner Jordan Spieth also sits at 10 under but was forced off the Spyglass Hill course after 16 holes due to rain.

Jason Day and Scott Piercy in sixth and seventh place respectively will also finish their second rounds on Saturday morning, as well as Englishman Tommy Fleetwood.

Brian Gay, who shared the lead with Langley after day one, dropped into a share for eighth after a level-par 72 at Spyglass Hill.