European Tour chief executive Keith Pelley has contacted the R&A to voice his displeasure at the "grossly unfair" penalty received by Li Haotong in the Omega Dubai Desert Classic.

Li was penalised two shots on the 72nd hole because his caddie was on a direct line behind the ball when he began to take his stance on the green.

A statement from Pelley read: "There has been much discussion and comment over the past 24 hours on the two-shot penalty given to Li Haotong for his breach of Rule 10.2b (4) on the 18th green of the Omega Dubai Desert Classic.

"Let me state initially that, under the new Rules of Golf issued on January 1, 2019, the decision made by our referees was correct, under the strict wording of the rules.

"It is my strong belief, however, that the fact there is no discretion available to our referees when implementing rulings such as this is wrong and should be addressed immediately.

"Everyone I have spoken to about this believes, as I do, that there was no malice or intent from Li Haotong, nor did he gain any advantage from his, or his caddie's split-second actions. 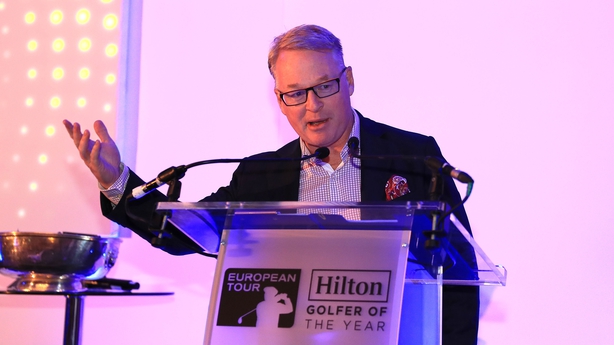 "Therefore the subsequent two-shot penalty, which moved him from T3 in the tournament to T12, was grossly unfair in my opinion.

"In an era where we are striving to improve all aspects of golf, we need to be careful and find the proper balance between maintaining the integrity of the game and promoting its global appeal.

"I have spoken personally to R&A chief executive Martin Slumbers to voice my opposition to the fact there is no discretion available to our referees in relation to this ruling, and I will be making additional representation to the R&A in the near future to discuss the matter further."

The R&A had earlier sought to clarify the ruling by posting an explanation on social media and have been approached for comment.

In explaining the penalty on Sunday evening, a statement from the European Tour read: "Li Haotong's caddie was on a direct line behind the ball when he began to take his stance on the 18th green.

"The player's caddie must not stand behind the player for any reason when a player begins taking a stance. Haotong could have avoided the penalty if he had backed off the stroke and retaken his stance. He did not, hence a two-stroke penalty applied to his score on 18."