Shane Lowry produced a strong finish to sink eight birdies in his final round of the Dubai Desert Classic, where Bryson DeChambeau was an impressive winner.

The Offaly man made a poor start to the day with a bogey and double-bogey inside the first six holes, but he mounted a stunning recovery to birdie all but four holes on the way to carding a five-under 67.

That leaves him on 14-under overall for the tournament but it wasn't enough for Lowry to catch up to the leading pack.

Lowry was seeking back-to-back tournament wins in Dubai, but that challenge faded in the third round after a one-under 71 pushed him down the leaderboard to leave him with a mountain to climb on the final day.

DeChambeau carded a closing 64 at Emirates Golf Club to set a new tournament record of 24 under par and finish seven shots clear of England's Matt Wallace.

The 25-year-old briefly gave the chasing pack a glimmer of hope with a bogey on the 12th following an errant drive, but birdied the 13th, 14th and 17th to seal an emphatic triumph. 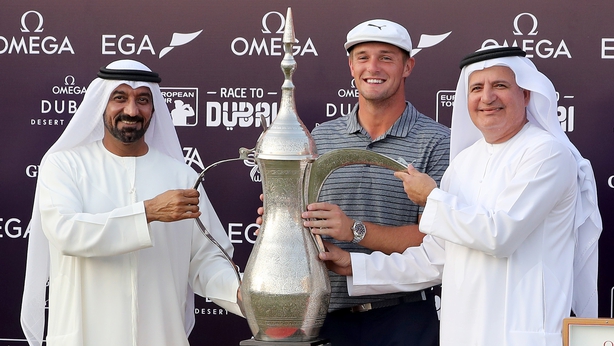 "It's incredible to get my first win overseas on the European Tour," said the world number five. "Today I was happy with my game. I executed a lot of great shots.

"It was obviously a lot of fun to be able to finally hoist an international trophy, I'm so happy about that. I was trying to shoot 25 under today and missed it by one, but I'm happy with the results for sure."

DeChambeau joined Jack Nicklaus, Phil Mickelson, Tiger Woods and Ryan Moore in winning the NCAA and US Amateur titles in the same season in 2015, while his opening 64 in Abu Dhabi the following year had playing partner Chris Paisley labelling him as "quite possibly the most impressive player I have ever seen".

The physics graduate describes himself as a "golfing scientist" and famously plays with a set of irons all cut to the same length, while he is also known to float his golf balls in Epsom salts to check if they are perfectly round.

"It's a lot of hard work with my caddie, just really grinding and trying to figure out how to take account of all the variables out there," DeChambeau said of his approach to the game.

"Whether it's air pressure, firmness values, mph on the ball speed, spin rates...we're trying to figure out as much as possible so I can be as consistent as possible and obviously it's showing.

"I think it's a little bit vindicating that I'm able to come out and have such success like this on multiple tours, so I'm very proud, happy and thankful as well."

Although DeChambeau will not move up in the world rankings on the back of this win, he will close the gap on the four players above him and has his sights set on Justin Rose in top spot.