Shane Lowry's hopes of winning back-to-back tournaments look remote after Bryson DeChambeau carded a fine 68 to streak away from the Offaly man at the top of the Dubai Desert Classic leaderboard.

Lowry - who won the bu Dhabi HSBC Championship last weekend - shot a one-under 71 to leave him at nine-under after his third round, but none of the pacesetters shot outside the 60s.

DeChambeau is 16-under overall, one ahead of Li Haotong, with Ernie Els and Matt Wallace another two back.

He may not bag another victory, but it's been another good showing for Lowry, and he'll certainly be satisfied with his day's work as a scorching finish salvaged a tough round.

He carded birdie-eagle-birdie in his final three holes, having suffered four bogeys in his first 12.

World number five DeChambeau had two straight bogeys on the seventh and eighth holes but ended the round strongly with four birdies after the turn, for a total of six on the day, to go 16-under for the tournament.

DeChambeau, who is bidding to claim his maiden European Tour victory, was not completely satisfied with his display despite holding an advantage heading into Sunday's final round at the Emirates Golf Club.

"I'm still leading... it's fantastic... but my expectation levels are for how I know I can perform, and I feel like I'm underperforming a little bit." 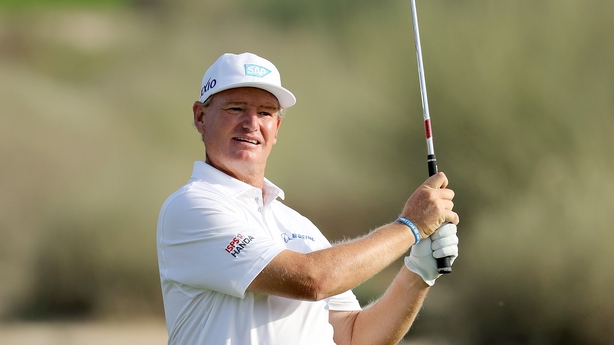 DeChambeau recovered after two bogeys to rattle in a 10-foot birdie putt at the 13th hole to grab a share of the lead, before further gains on the 15th and 17th holes to edge ahead.

"Made it happen when it's necessary and hopefully I can have one more of those days and maybe even a better-ball striking day... I can't express how awesome it would be to win on the European Tour," DeChambeau added.

Hot on DeChambeau's heels is Li, who shot a third straight round of 67, finishing with two consecutive birdies, to come back into contention.

"I did play really solid compared to the last two rounds and long game being much better. But just had a couple of mistakes on the greens. In total, pretty good round," Li said.

Lucas Herbert, who led alongside DeChambeau after 36 holes, started poorly but recovered late on to sit fifth where he was in a four-way tie.