Ryder Cup holders the United States will go into this year's meeting with Europe as underdogs, claims Masters champion Patrick Reed, as the country's golfers seek to end their overseas-winning drought in Paris.

Reed will be a key member of Jim Furyk's team as the Americans seek to defend the title won in commanding fashion at Hazeltine National two years ago.

The 28-year-old Texan, however, believes the odds will be in Europe's favour when the clash tees off at Le Golf National course in two weeks' time.

"We feel great and we can't wait to get over there and try to end the drought of not winning overseas," Reed said via video link to promote his participation in this year's Hong Kong Open.

"I feel that kind of takes a little bit of pressure off us and puts more pressure on the European team because they're the ones that have had so much success overseas, that everyone thinks we're going to come in and they're going to win the Cup again.

"So we're going to go in and feel like we're the underdogs and try to play the best that we can."

The Americans have not won the Ryder Cup on foreign soil since a 15-13 victory at The Belfry in 1993 and have only emerged victorious on European soil twice since the biennial competition was extended to include players from across Europe in 1979.

The Americans' win in 2016 ended a run of three straight successes for the Europeans - who are captained by Thomas Bjorn this time around. 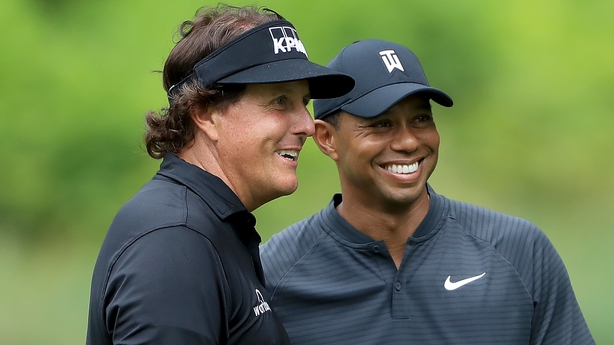 Reed feels he and his team mates will be bolstered by their status as defending champions as well as by the inclusion of Tiger Woods and Phil Mickelson.

"I think the biggest thing is we finally got a taste of victory," he said of the Hazeltine win.

"Having us in control of the Cup right now means we have the confidence in ourselves. We've won, we feel great and the guys on the team are playing really well.

"To bring the dynamic of having Tiger and Phil back on the team, and two rookies on the team in Bryson DeChambeau and Tony Finau who have been playing really stellar golf throughout the year, it just feels like we have a lot of confidence in our guys."

Reed, who secured his place on the team by finishing in fourth place on the US' points list, is relishing the opportunity to tee up at his third Ryder Cup having made his debut in his country's heavy defeat at Gleneagles in 2014.

"I don't really think it's as much pressure as it is excitement," he said.

"It's so different. It's a great way to finish off the season and start rebuilding for next year's season."