Housemates Zach Johnson and Kevin Kisner set the pace in the 147th Open Championship as Tommy Fleetwood and Rory McIlroy headed the European bid to end American dominance of the majors.

Johnson, who is looking to become the first player in history to win major titles at Augusta, St Andrews and Carnoustie, added a 67 to his opening 69 to set the early clubhouse target on six under par.

First-round leader Kisner looked set to surpass that with ease when he birdied the 13th and 14th to reach eight under, only to hit his second shot to the 18th into the Barry Burn and run up a double-bogey six.

That meant Fleetwood was just a shot off the lead after defying miserable conditions, with the aid of a free Open-branded umbrella, earlier in the day to card a flawless 65, two shots outside the course record he set in last year's Dunhill Links Championship.

And McIlroy was another stroke back on four under after compiling a second consecutive 69 in pursuit of a second Open title and first major victory in four years.

Confidence is high for @McIlroyRory after a second successive 69 💬 #TheOpen pic.twitter.com/dXoa01VKCz

McIlroy has certainly not been at his brilliant best so far, but kept himself firmly in the hunt with a round containing four birdies and two bogeys.

"If I can get on a run or get off to a fast start in the next couple of days, I definitely see something like a 66 or a 65. I think I'm capable of that."

Paul Dunne will be the only other Irish man in action over the weekend after he carded a round of 73 to finish on two over par.

Seeking a first major title since 2008, Tiger Woods was six shots off the pace after a second successive 71, the 42-year-old carding consecutive rounds of par or better to start a major for the first time since the 2013 Open at Muirfield.

Johnson won the Masters in 2007 and the Open at St Andrews in 2015 by beating Louis Oosthuizen and Marc Leishman in a play-off, but came into the week firmly under the radar. 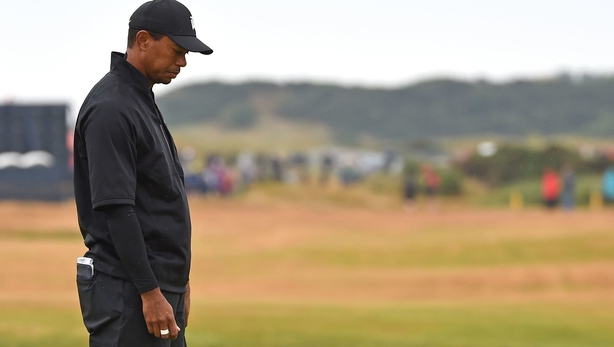 "I don't know who is managing the radar. It is irrelevant to me," said the 42-year-old, who is sharing accommodation at the Open for the third year in succession, with Kisner joining Johnson, defending champion Jordan Spieth, Justin Thomas, Jimmy Walker, Jason Dufner and Rickie Fowler in domestic bliss.

"Maybe I'm just overly conservative and boring and that's perfectly fine. I just like to compete. It doesn't matter where it is, what it is. Just give me an opportunity."

A first major title could now beckon on home soil instead and make Fleetwood the first Englishman to lift the Claret Jug since Nick Faldo in 1992.

"It would be very special," the world number 10 said. "I can't lie about it. If I could pick one tournament in my life to win, it would be the Open. I've never been anywhere near before.

"We're only halfway through the tournament unfortunately. There's no point thinking about the end game. Thirty six holes is a long time."

Americans Pat Perez and Xander Schauffele were alongside Fleetwood on five under.