American Kevin Kisner took the first step towards joining his housemates as a major champion while Tiger Woods had to settle for a par finish after the opening round.

Kisner, who led by a shot after 54 holes of last year's US PGA before finishing seventh, carded a five-under-par 66 to secure a one-shot lead over compatriot Tony Finau and the South African pair of Erik van Rooyen and Zander Lombard.

McIlroy, who is seeking a first major title since 2014, was part of a large group on two under par which also included Spain's Jon Rahm, world number two Justin Thomas, 2015 winner Zach Johnson and the English pair of Danny Willett and Matthew Southgate.

Meanwhile, Paul Dunne began his Open campaign with a level par round of 71.

The Wicklow man famously held the joint lead ahead of the final round as an amateur in 2015 and goes in to tomorrow well placed to get in the mix with the leaders.

Shane Lowry was also among the early starters in Scotland but the Offaly man never got going.

The front nine consisted of two bogeys and one birdie and he double bogeyed the tenth en route to a three-over 74.

Padraig Harrington endured an even worse afternoon. The Dubliner faces a battle to make the cut after posting five over par, while Darren Clarke - another former champion - carded four double bogeys, five bogeys and two birdies in a disastrous 11-over-par 82.

Tiger Woods had arrived at the course with Kinesio Tape visible on the back of his neck, a worrying sign given the 42-year-old's litany of injury problems in recent seasons.

But although the 14-time major winner visibly winced after hitting his opening tee shot, that appeared to be the result of getting some dust from the dry ground in his eye and he went on to make an ideal start with a birdie from 10 feet. 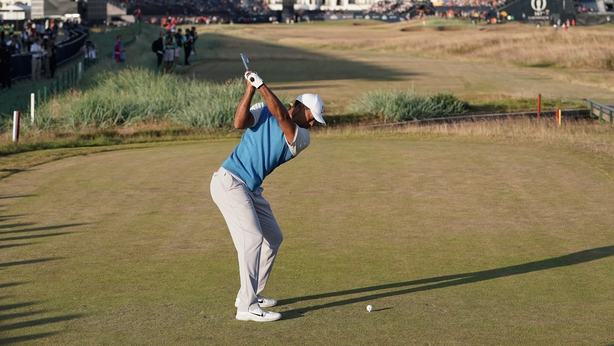 Woods, who has not won a major since the 2008 US Open, also birdied the fourth and followed a bogey on the 10th with another birdie from 35 feet on the next, but dropped shots on the 13th and 15th and had to settle for a level-par 71.

"I thought I played a  pretty solid round and unfortunately didn't take care of both par fives and hit (an) eight iron to both of them," said Woods, who described his stiff neck as "no big deal."

"The round could certainly have been a little better," he added.
Kisner is sharing accommodation with defending champion Jordan Spieth, Thomas, Jason Dufner, Johnson,

Jimmy Walker - with eight major titles between them - and Rickie Fowler, with only Fowler and Kisner still seeking their first major success.

But while Spieth slipped from three under to one over by dropping four shots in the last four holes, including a trip into the Barry Burn on 18, Kisner had no such problems thanks to an eagle, four birdies and a solitary bogey.

"It's not intimidating at all," Kisner, who also shared Spieth's plane home after his victory at Royal Birkdale last year, said of his housemates. "They're all great people. That's the best part about it."

Van Rooyen, who failed to convert a four-shot lead after 54 holes of the Irish Open a fortnight ago, carded five birdies and dropped his only shot of the day on the tough closing hole.

"It was playing as easy as it was going to play this whole week this morning, no wind at all, so you had to go out and take advantage of it," said Van Rooyen.