Rory McIlroy will head into the Open Championship in a positive frame of mind after completing his competitive preparations - and duties as tournament host - in the Dubai Duty Free Irish Open.

McIlroy carded a final round of 71 at Ballyliffin to finish two under par, but saw signs of progress with his problematic putting with four birdies in six holes around the turn.

"There were improvements over the weekend," McIlroy said. "I hit the ball the best I've hit it on Thursday and I felt like I sort of kept it up. It maybe wasn't quite as good the last three days, but I putted a lot better today. I felt a lot better about it so that was great.

"Sometimes when I get too square with my feet, my upper body can get a little bit left and every putt I was missing was to the left. The more I can be just a little bit open with my lower body, I can see it a little bit better. I'm right-eye dominant, as well. It's easier to see it down the line if I'm a little more open.

"I feel like I've made some improvements over the last couple of days on that and at least I know I'm trending in the right direction heading into the Open Championship."

McIlroy has spent the last four years as tournament host of the Irish Open, during which time it has become part of the lucrative Rolex Series and seen its prize fund rise to $7m (€6m). 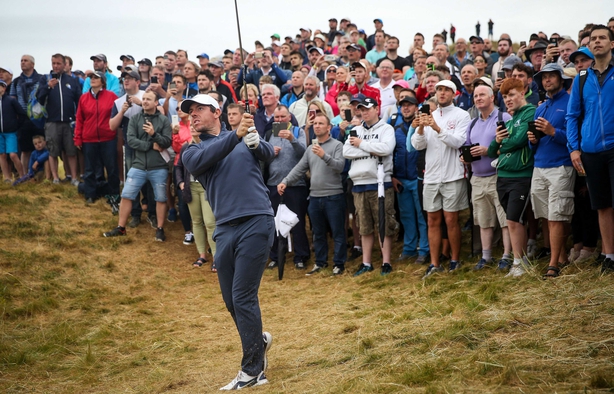 From next year that role will be rotated among the top Irish players, with former Ryder Cup captain Paul McGinley taking over in 2019 at Lahinch.

"It's been an eye-opener to see how much goes into running a golf tournament and it's been great for me, especially for the future," McIlroy added.

"This probably isn't going to be the last time that I'm involved in a golf tournament and it's been great in terms of who we've been able to help and what we've achieved from a charitable standpoint.

"It's been a great four years and I'm looking forward to going to Lahinch next year, maybe with not quite as much responsibility."