Reed carded a final round of 71 at Augusta National to finish 15 under par and a shot ahead of Fowler, with 2015 champion Spieth another stroke back after an astonishing challenge faltered at the last.

Spieth had rallied from nine shots behind at the start of the day to claim a share of the lead with his ninth birdie of the day on the 16th, setting up the chance to equal the course record of 63 or even match the major championship mark of 62.

But a terrible drive on the 18th for the second time this week led to a crucial bogey and more Augusta demons, after he squandered a five-shot lead with nine to play in 2016 in defence of his title.

Fowler looked out of contention after playing the first seven holes in one over par, but birdied six of the last 11 - including the last - to keep the pressure on Reed, who held his nerve in admirable fashion.

Seeking the win he needs to become just the sixth player to complete the career grand slam, McIlroy was just a shot off the lead after two holes but faded badly with a closing 74.

And although it was not the collapse of 2011, when he enjoyed a four-shot lead after 54 holes before crashing to a closing 80, the Northern Irishman can be forgiven for wondering if his place in history will remain elusive.

What many expected to be a battle between the final pair of Reed and McIlroy got off to a shaky start, with Reed's drive finishing close to a tree to the left of the fairway and McIlroy hitting a wild drive to the right.

McIlroy was lucky to remain in bounds and even more fortunate to have a clean shot, the 28-year-old finding a greenside bunker with his approach and saving par.

Reed appeared to hit the tree on his backswing but also ended up in the same bunker as McIlroy, only to thin his third shot to the back of the green.

.@RickieFowler closes his final-round 67 with a birdie on No. 18 and finishes at 14-under par. #themasters pic.twitter.com/QfwwjncVVk

McIlroy looked like getting on level terms after a spectacular approach to the par-five second, but was unable to convert the eagle putt from four feet and that would prove to be as close as he would get to the lead.

A bogey on the third was cancelled out by a birdie on the fourth, but McIlroy also dropped shots at the fifth, eighth and 11th to effectively end his chances as Spieth charged through the field.

After racing to the turn in 31, a birdie on the 12th - where he took seven in the final round in 2016 - was followed by another on the 13th after a stunning approach from the pine straw set up an eagle chance from 12 feet.

The gap was down to one when Reed found trouble off the tee on the 11th and missed from five feet for par, with Spieth making birdie on the 15th moments after Reed birdied the 12th. 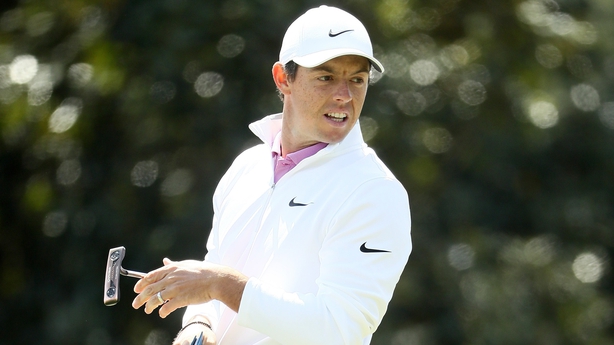 Reed enjoyed an enormous stroke of luck when his approach to the 13th came up short, but plugged in the bank of Rae's Creek instead of rolling back into the water.

But he was unable to take full advantage and make birdie after an enormous roar from the 16th indicated that Spieth had done precisely that.

However, Reed reclaimed the lead with a birdie from close range on the 14th before Spieth's drive on the 18th clattered into the trees and failed to even reach the fairway.

The 24-year-old was faced with a second shot of more than 260 yards and after hitting a three wood up the fairway and pitching to eight feet, missed the crucial par putt.