Jamie Donaldson remains the man to catch after a weather-affected second day of the Omega Dubai Desert Classic, with Rory McIlroy well placed in the chasing pack.

After fog delayed the start of play by two hours and 50 minutes, Donaldson added a 69 to his opening 62 at Emirates Golf Club to set the clubhouse target at 13 under par.

The second round is scheduled to resume at 7.30am local time on Saturday.

McIlroy made a flying start ton Friday with three birdies in the first five holes, before dropping his first shot of the week following a wayward drive on the eighth.

The four-time major winner, who marked his first competitive start since October with a tie for third in Abu Dhabi last week, bounced back with a birdie on the 10th and parred the next before play was suspended for the day. He stands at 10 under.

Paul Dunne and Graeme McDowell both lie on four under, the projected cut mark, after rounds of 68 and 74 respectively.

Darren Clarke won't be around for the weekend as his 77 saw him finish on 8 over.

Donaldson has a one-shot lead over China's Li Haotong, who completed a second successive 66, with South Africa's Branden Grace a shot further back following a 65. Sweden's Alexander Bjork is also 11 under with six holes remaining.

A late double bogey meant 54-year-old Spaniard Miguel Angel Jimenez had to settle for a 68 to finish 10 under alongside South Africa's Thomas Aiken and McIlroy. 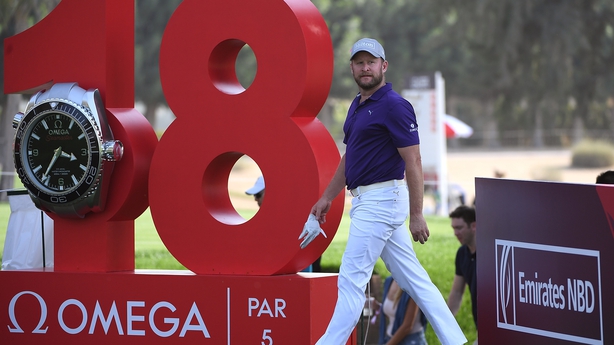 Donaldson, who had flirted with carding the first 59 on the European Tour on Thursday, understandably struggled to reproduce that sort of scoring, but recorded four birdies and a solitary bogey in pursuit of a first win since December 2015.

"I have backed up low scores like that with another one but today it wasn't to be," Donaldson told Sky Sports. "But yeah, quite happy with a 69.

"It was pretty solid again. Drove the ball well. Iron shots were good. Took the birdies generally when I hit it close enough, could have played the par fives maybe a little bit better. I went for it a bit on the last there, trying to get it right around the corner and blocked myself out.

"If you shoot three under on the par fives as opposed to one, then it's a different day. But overall I'm happy."