India's Arjun Atwal remains the man to catch at the halfway stage of the AfrAsia Bank Mauritius Open, but saw his commanding lead trimmed to a single shot at Heritage Golf Club.

Atwal began the day four shots clear of the chasing pack after a stunning course-record 62 on Thursday, but could only add a second round of 70 to finish 10 under par.

That left the 44-year-old a shot ahead of England's Laurie Canter and the South African duo of Dylan Frittelli and Louis de Jager, with pre-tournament favourite Louis Oosthuizen two shots further back on seven under.

Darren Clarke and Gavin Moynihan both missed the cut mark of one under.

Double bogeys on the par-three 15th and 3rd holes took Moynihan to four over for the day and five over in total.

Clarke improved on his difficult opening day and holed three birdies but a triple bogey on the fifth meant he finished with a one-over 72 and six over overall.

"I was pleased with how I played," said Atwal, who did not have a practice round at the venue following a 16-hour journey to the island.

"The putter was definitely not as hot as the first day. I was hitting the ball just as good but it is tough to follow up a 62 with another low round. I'll take this one-under. I'm really looking forward to the weekend." 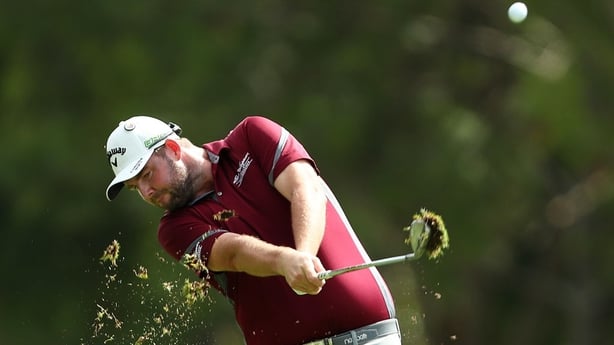 Meanwhile, Marc Leishman hit a best-of-the-week 65 to grab a share of the lead on day two of the Australian PGA Championship in Queensland.

An eagle on the 15th and seven birdies led to a seven under par round for the Australian, who dropped shots on the 12th and 18th, as the Australian joined compatriot Adam Bland on 12 under par.

Bland made seven birdies and one bogey in a second successive round of 66.

Spain's Sergio Garcia, who is looking to cap the best year of his career with a fourth victory of 2017, slid into joint 10th after a double bogey on the ninth and bogies on the 10th and 18th saw him finish on 71, leaving him on six under overall.

Greg Chalmers carded a 66 to lie third on 10 under, with Cameron Smith (67), Jordan Zunic (69) and Rhein Gibson (67) completing an all-Australian top six on nine under. Former Masters winner Adam Scott missed the cut after a second-round 74.

Michael Hoey was seven shots off the cut mark of one under after a second successive 75.