Defending champion Hatton, who began the day with a five-shot lead, held on to win by three shots to become the first man to retain the crown, while Fisher set a new course record with a brilliant final-round 61 to finish second.

Of the Irish, Paul Dunne finished on 13 under, 11 shots behind Hatton,  after a closing round of 70 which was good enough for a tie of seventh place.

Graeme McDowell finished on 11 under par after a round of 65, while Shane Lowry was a shot further back after his 69.  Gavin Moynihan completed his tournament on eight under after a 68, while Rory McIlroy's 72 saw him back at four under.

Speaking afterwards, Hatton said: "I didn't see a leaderboard on the back nine until the 16th green, when I saw he (Fisher) was at 21 (under) and I was thinking how well he was going.

"So you know, fair play to Fish. It was an incredible round of golf, and he certainly did push me all the way."
Hatton, 25, opened up a seven-shot lead with four birdies on the front nine and gained a further shot on the 14th - he dropped only two shots during the tournament - to finish on 66, 24-under, for his second European Tour title. 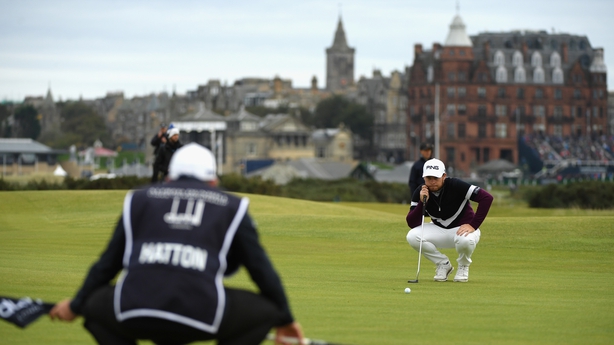 "Obviously I'm very happy," added Hatton, who took a share of the previous course record of 62 when winning the tournament last year.

"This week was the first time I had ever defended a title or had the chance to try and do it.

"You know, it felt like it was a lot harder this year, well, winning this year, than it was last year. I'm so happy that I managed to get over the line."

Fisher, who played himself into contention by gaining six shots in his last seven holes on Saturday, maintained his sizzling form by threatening to close with a record-breaking 59.

He carded seven birdies on the front nine and hit four more successive birdies from the 12th to stand at 11 under, but fell short of the magical figure as he parred the final three holes.

Victor Dubuisson finished third, having also set himself up for a chance of a new course record with three holes to play after carding 10 birdies to stand 10 under after the 15th.

But the Frenchman three-putted the 16th to drop his first shot of the day and parred the last two holes for a nine-under 63.

Scotland's Marc Warren and England's Robert Rock both carded final-round 66s to tie for fourth place with Frenchman Gregory Bourdy, who shot a 71 after starting the day as Hatton's closest challenger.