Paul Dunne kept his quest to capture back-to-back European Tour titles on the right track with a four-under 68 that left him two off the lead heading for the weekend at the Alfred Dunhill Links Championship.

The Greystones man held off a Rory McIlroy burst to win the British Masters last week, chipping home a spectacular birdie to clinch it on the last.

He kept that momentum going on the St Andrews Old Course yesterday - where he shone so brightly as an amateur at the 2015 Open - and stayed on the coat-tails of joint leaders Tyrrell Hatton and Tommy Fleetwood with a four-under-par 68 on Friday.

He's now nine-under-par for the tournament, two off the pace, but well poised for another weekend charge.

It was a good day too for both Gavin Moynihan and Padraig Harrington, with the former carding a two-under 70 and three-time major winner Harrington hoisting himself up the leaderboard with a 68.

They're both four-under overall, as is Graeme McDowell, who went round in 71.

Shane Lowry had a hugely frustrating day at the office though. The Ofaly man undid the good work of his opening 68 as he slid out of contention with a three-over, four-bogey 75.

World number six Rory McIlroy, hoping to end a frustrating year with a win, was overshadowed by Fleetwood, who was one of his playing partners.

McIlroy ended the day 11 shots off the lead on level par after a 71 which included a double bogey seven on the sixth hole. With the cut coming after 54 holes, the Northern Irishman is not yet out of the tournament but he must make up a lot of ground as he plays Kingsbarns on Saturday.

Fleetwood's impressive round included a run of five successive birdies on the back nine. He almost extended that sequence to six when a birdie putt from off the green on the 16th narrowly missed the hole. He might even have had an eagle on 15th too when his second shot at the par four bounced onto the green and hit the flag.

He finished his round in style by picking up his ninth birdie at the 18th. 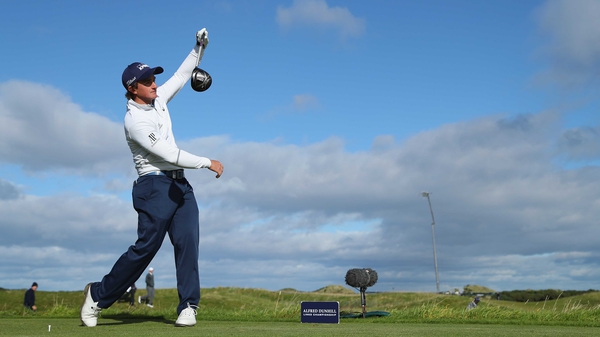