Jordan Spieth would relish a Sunday showdown with Rory McIlroy in the US PGA Championship, even though it could derail his bid to become the youngest player to complete a career grand slam.

Woods was 24 years, seven months and 25 days old when he won the 2000 Open at St Andrews by eight shots, while Spieth celebrated his 24th birthday just four days after the Open and posted a picture on social media of a small birthday cake perched on top of the Claret Jug.

McIlroy, who finished fourth at Birkdale after overcoming a nightmare start, was installed as the pre-tournament favourite ahead of Spieth thanks largely to having won twice before at Quail Hollow, where he holds the course record of 61.

"Rory is a guy who is very difficult if you come into a one-on-one type situation no matter where it is, and especially in majors, because he's not afraid to hit the shot," Spieth said.

"He plays so aggressively and that's what you have to do to win. You're going to lose some tournaments because of it, but you're going to win a lot more than playing any other way.

"He's proven that. He won this tournament by seven shots. Obviously that doesn't come from playing too safe. Even when he had the lead, he kept his foot on the gas pedal. He's done that for dozens of worldwide victories.

"If you're matched up on Sunday, and you get to choose somebody, you obviously want to be able to play against somebody like Rory who has four major championships and is one of the top couple most accomplished players in this field.

"But he is one to fear in that position because of what he's capable of doing and how he's going to do it.

"I think it's cool that we've both had the success that we've had at such a young age, and I think the coolest part about it is the question of what's it going to be like for the next 20, 25 years.

Spieth was among the early starters in the opening round alongside fellow 2017 major winners Sergio Garcia and Brooks Koepka, with McIlroy getting his bid for a third US PGA title under way at 1.35pm local time (6.35pm Irish time) in the company of Jon Rahm and Rickie Fowler. 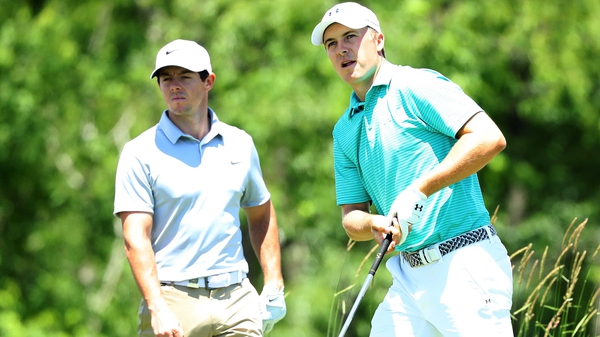