Rory McIlroy believes he has finally found some momentum in time for the final major of the year.

The world number four eased the frustration of a season of form and fitness issues by producing a strong finish at the Open on Sunday.

McIlroy had missed three cuts in four events prior to his appearance Royal Birkdale, including at the Irish Open at Portstewart.

His disastrous opening to the Open Championship would have brought that now all-too familiar sinking feeling as he dropped five shots in his first six holes.

But from there he rallied and, at the halfway stage, he may even have harboured hopes of victory. That proved beyond him as some opportunities were missed and winner Jordan Spieth pulled away, but McIlroy still finished in a tie for fourth after a final-round 67.

McIlroy now feels his game is in good shape as he prepares for the US PGA Championship at Quail Hollow in Charlotte, North Carolina, early next month.

The 28-year-old said: "The PGA is only three weeks away, so I'm happy that's coming quite quickly on the back of this.

"The game is in much better shape than it was heading into this week, so I'm happy with that.

"It's hard whenever you feel like you've had a chance to win a major and you're not quite there - that's disappointing - but at the same time I have to take the positives. I'm looking forward to the next few weeks." 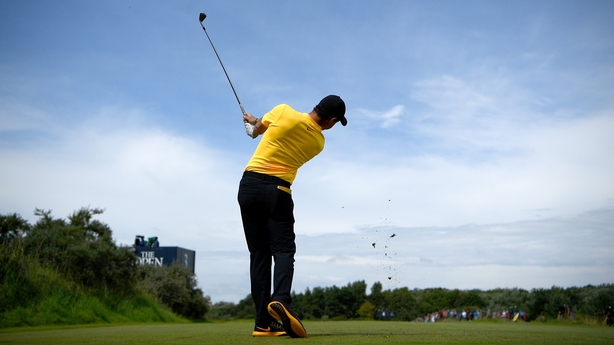 The schedule in the coming weeks also seems well suited to helping McIlroy get back to his best.

The Bridgestone Invitational at Firestone in Akron, Ohio, is played at a venue where he has previously won while Quail Hollow holds even happier memories.

McIlroy has won tournaments there in 2010 and 2015 and currently holds the course record of 61. He has had four other top-10 finishes there.

The course will not be entirely familiar with four holes having been renovated extensively ahead of the championship and a different, faster-playing grass having been introduced on the greens.

That, however, has hardly suppressed McIlroy's appetite for what lies ahead.

He said: "I'm excited for the next two weeks. I haven't played at Firestone for a couple of years but the last time I played there I won and I've had some good finishes.

"And Quail Hollow, I've played well there - shot a couple of course records, had a couple of wins, got beaten in a play-off as well. And another couple of top-10s thrown in there.

"So I play well at Quail Hollow, I love the golf course. I know they've made a few changes but I'll have some really good vibes going into that week."