Scott Stallings coped with energy-sapping heat and humidity to card 11-under-par 60 and vault to a one-stroke lead on 19-under after the third round at the Barbasol Championship in Alabama, as Seamus Power went round in a excellent 64 to move to 11-under.

A day after Chad Collins shot 60 to take the halfway lead, Stallings matched it by racking up an eagle and 10 birdies for the best score of his PGA Tour career.

His round was close to flawless as he hit every green in regulation, his only bogey a three-putt at the sixth.

Stallings finished with a flourish with three successive birdies, coaxing a 13-foot birdie putt in the right-hand door at the par-four 18th to post a 19-under 194 total with one round left at the Robert Trent Jones Golf Trail Grand National course in Opelika.

Power [below] bounced back from a tough day-two 70 with a flawless round studded with four birdies.

He's tied 14th heading into the final day, but Stallings holds the aces. 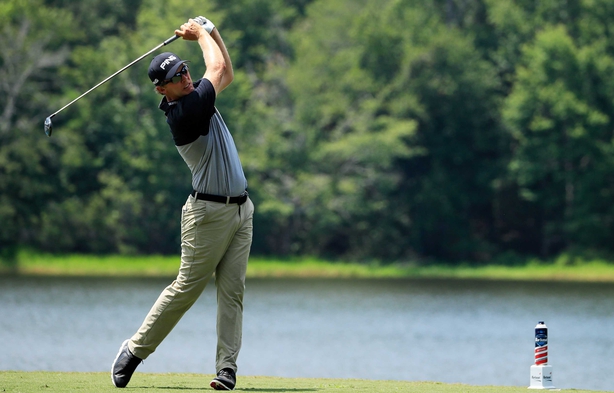 "I just tried to stay as cool as I could temperature-wise," Stalling told Golf Channel, sweat pouring off his beetroot-red face.

"It's brutal hot out there. TV does it no justice."

While tough to deal with physically, Stallings said the heat had been an ally mentally as it kept his mind off his score.

"That was a good distraction for me. Its easy to lose your train of thought. I ran into that yesterday. I was playing great and let my mind go a little bit and faltered a little bit coming in," he said.

My goal out there today was to put myself in the same position and finish it off better than the day before.

Stallings, 32, has won three times on the PGA Tour, though his career was interrupted when he was suspended for three months in 2015 for taking a banned anabolic agent that he says he purchased over the counter to help with fatigue, unaware it was on the Tours banned substance list.

After struggling for most of 2017, Stallings found his form to tie for fifth last week at the John Deere Classic, an improvement he credits to his putting.

"I went back to my old putter last week," he said. "I wonder what took me so long to get back to it but it was nice to see some putts go in."