McIlroy, winner of the Claret Jug at nearby Royal Liverpool in 2014 and a four-time major winner, recovered from a perilous five over after just six holes to stage an impressive four-birdie recovery after the turn to card a one-over 71.

The world number four has missed three cuts in the last four tournaments and his Open challenge looked to be be over before it had begun until he was jolted out of his malaise by Fitzgerald.

"It was on the sixth tee. JP gave me a good talking to and sort of reminded me of who I was," said the 28-year-old, who is six shots off the lead held by American trio Jordan Spieth, Matt Kuchar and newly-crowned US Open champion Brooks Koepka who all opened with rounds of 65.

"Thankfully he's not had to do it too often and he's never afraid to do that and I feel today it helped a lot more than at other times because I needed something.

"That helped and that got me back in a positive frame of mind. At that point I mumbled and said 'Whatever' but it definitely helped."

It did not have the immediate impact McIlroy would have hoped as he bogeyed the sixth to drop to five over but, having turned in 39 with no more dropped shots, his rescue mission kicked into gear with four birdies in his last eight holes. McIlroy said  his recent poor form had been playing on his mind and was not helped by waking up to wet and windy weather.

"I'm an early riser so I followed the guys going off really early and the first hole looked like to be playing about a par six. I thought that would have an effect on me," he added.

"I was nervous going out, a little anxious, timid, just (did) not really (have) as much belief in myself as I should have had.

"(It was) just a bit of lack of confidence over the last couple of weeks and letting that get in my head.

"I was thinking 'Jeez, here we go again', but I just needed to stay patient." 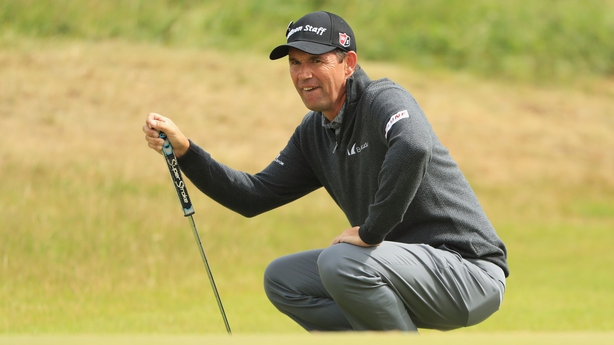 Of the other Irish competitors at the 146th Open, Padraig Harrington carded an opening 73 as he retured to the venue where he won his second successive Claret Jug in 2008.

Harrington's round included a double bogey, one other dropped shot and no birdies.

Shane Lowry made the turn at one under but dropped shots at 10 and 13 before a double bogey at the 16th left him three over.

The Offaly man recovered to get one of those shots back at the par-five 17th to finish with a round of 72.

Darren Clarke struggled over his first 16 holes, dropping to seven over par before the 2011 champion finished strongly with birdies on his final two holes.

After hitting just five of 14 fairways, Jordan Spieth acknowledged there was room for improvement as he looks to add the Open title to his Masters and US Open victories in 2015.

"I thought today's round was extremely important, as they all are, but given the forecast coming in, I thought you really needed to be in the red (under par) today," the 23-year-old said.

"Everything was strong. I give it a nine across the board for everything - tee balls, ball-striking, short game and putting. So things are in check. It's just about keeping it consistent. 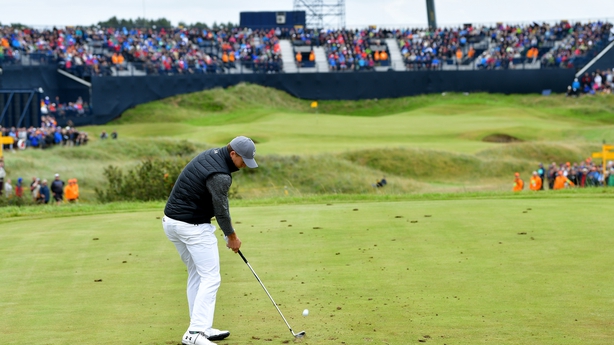 "I'd call it a top five major round that I've played. There are scores that I've shot that were closer to par that were better given what I needed to do.

"But I couldn't have done much better today. I essentially missed two greens today in some 15mph winds."

Spieth had not played competitively since winning the Travelers Championship on his last start three weeks ago by holing a bunker shot on the first hole of a play-off with Daniel Berger.

And Brooks Koepka had been inactive for a week longer since claiming his first major title in the US Open at Erin Hills, where his 16-under-par total equalled the tournament record set by McIlroy in 2011.

"We had planned to take it off so it's not a big deal," said Koepka, who is trying to become the first person since Tiger Woods in 2000 to win the US Open and Open in the same year. Only Woods, Bobby Jones (twice), Gene Sarazen, Ben Hogan, Lee Trevino and Tom Watson have achieved the feat.

Heavy rain and wind had made life a misery for the early starters, with former champion Mark O'Meara hitting the opening tee shot at 6:35am straight out of bounds.

O'Meara went on to card a quadruple-bogey eight on his way to an 11-over-par 81, but was far from alone in finding the 448-yard par four a daunting prospect.

One player in each of the first three groups also went out of bounds and the first eight groups were a combined 23 over par for the opening hole before Sweden's Alex Noren - who shot 68 - recorded the first birdie.