Spaniard Jon Rahm insists he can never come close to the late, great Seve Ballesteros, but takes encouragement from the comparison.

At 22 the Basque-born golfer arrives at Royal Birkdale the same age as Ballesteros when he won his first of his three Open titles, having announced himself to the world three years earlier in 1976 with a second-placed finish on the Southport links.

Rahm is currently the game's hottest property, having rocketed to eighth in the world after just 12 months in the professional game thanks to wins on the PGA and European Tours, the latest a commanding victory at the Irish Open a fortnight ago.

It's the greatest walk in golf. #TheOpen pic.twitter.com/iN41BMqnf9

"I wasn't fortunate to be able to watch Seve much," said the United States-based Spaniard.

"My family didn't get into golf pretty much up to the close 2000s and by then, you know, he was already on the down slope of his career.

"I wish we would have, though. I've seen every video on YouTube that you can of Seve.

"I've seen his video here in '76, his one winning in '79 about a million times, how he plays the back nine without hitting the fairway, and makes 4-under par, it's absolutely unbelievable.

"To whoever compares me to him, I'm never going to be Seve. Seve was so unique, so special.

"If I'm somewhat compared to him, to see the hopes people have in me, it's amazing.

"I try to take it as a positive and embrace it. He's a great idol of mine and I try to emulate a lot of things he used to, and a lot of that is the inspirational power he had, the way he brought masses together and people together.

"If I could do a quarter of whatever he did, I'd probably be satisfied with my career."

Rahm, whose explosive temper has led him to somewhat fittingly employ a former bomb disposal expert as his mental coach, missed the cut at last month's US Open and finished joint 59th on his Open debut last year.

His best finish in four majors is tied-23rd when he finished as the low amateur at the 2016 US Open and he admits his experience is limited and varied. 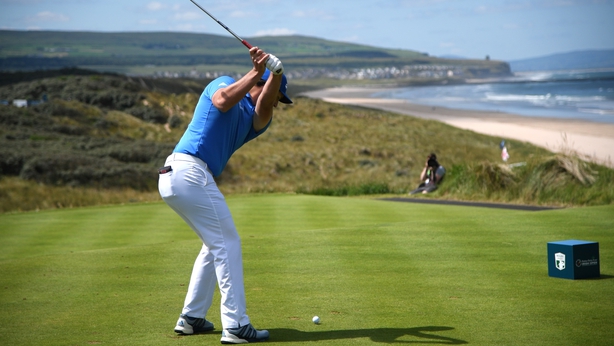 "It still takes a little bit of adjusting period. This is my fourth major that I've ever played and each one's been a very different feeling," added the Spaniard.

"After a win in Ireland and being top 10 in the world, it certainly is a different experience, which I'm enjoying a lot.

"When I got to the US Open (last month) I tried to control too much, I tried to do too much. I tried to take care of too many things at the same time.

"I've learned what I have to do now to manage my own mental strength and hopefully play well in future majors."

Rahm listens to rapper Eminem as part of his warm-up routine, but admits there are not any lyrics he can quote.

"He has a lot of songs that can very inspirational. To pick one, it's a little hard - especially with the language that is spoken in those songs," he said.