Open champion Henrik Stenson admits it was a bittersweet moment when he returned the Claret Jug on Monday, but is eagerly looking forward to the next chapter in his career.

Stenson won his first major title at Royal Troon last year, producing a record-breaking performance to come out on top in a sensational shootout with Phil Mickelson.

A closing 63 equalled the lowest score recorded in any major and saw Stenson become only the second player to finish one of golf's four biggest events on 20 under par.

The Swede's 72-hole total of 264 also eclipsed the previous best in a major set by David Toms in the 2001 US PGA and was three lower than the previous Open record set by Greg Norman at Sandwich in 1993.

But all those achievements still did not entitle Stenson to hold on to the Claret Jug when he arrived at Royal Birkdale on Monday, with R&A chief executive Martin Slumbers waiting outside the clubhouse to regain possession of the famous trophy.

"It definitely feels like it's turning the page, returning the Claret Jug, and now I can start looking at this week's competition and also for the years to come," Stenson told Press Association Sport.

"It's easy to be stuck in what has been and not giving enough to the present and the future. It's a bit bittersweet to return it, but it had to be done.

"It's been a busy year, the busiest of my career, but also the best one and the proudest one."

Stenson somehow managed to take the Claret Jug on a jet-ski - complete with life-jacket for the famous trophy - during his year as Open champion, but insisted it was undamaged when he returned it.

"It has seen a lot of hands and lot of people but it hasn't been dropped to my knowledge," he added during an interview to promote HSBC Hour, which offers free golf to children and their families at around 300 golf clubs in the UK and Ireland.

"It might have bumped into something on one occasion down where the names are so maybe a minor little tweak needs to be done, but nothing major and from what I hear it might have suffered larger damage from some of my previous colleagues that had it in their possession.

"The replica is in Florida in my office. It's 90 per cent of the size so when you don't have the real one next to it you can't really tell the difference. I'll always look at it with great joy and memories from last year." 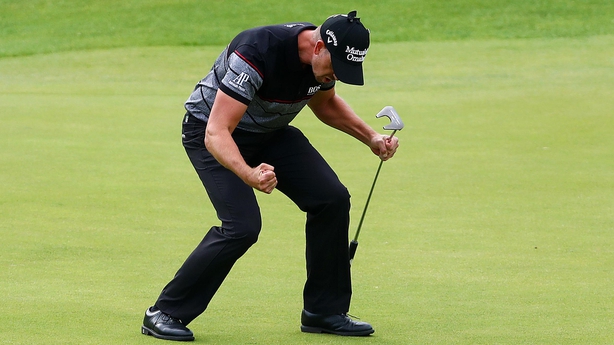 Stenson took a one-shot lead into the final round 12 months ago but immediately saw that overturned as he three-putted the first as playing partner Mickelson made birdie.

However, Stenson responded with a birdie on the next and the pair traded blows in a manner reminiscent of the 'Duel in the Sun' between Tom Watson and Jack Nicklaus at nearby Turnberry in 1977.

"I knew I had to play my best golf," Stenson added. "Phil is a world-class player and has been for 20 years. Even though I didn't get off to the best of starts I kept to my game plan and executed the best round I have ever played.

"It's with great pride I think back on that round because it's as good as it's been for me.

"I had a 20-footer on 14 to edge in front and I felt at that time Phil is not going to back down and give it to me so I need to make birdies. I rolled that one in and followed it with that monster on the 15th - it was 51ft off the fringe and I walked it in quite early.

"It was tracking beautifully on line, dead centre and dropped in. The crowd is amazing at the Open and to make a putt like that in front of packed grandstands gives me goosebumps just thinking about it.

"You don't think about records when you're out there competing, it's all about giving yourself the best opportunity to win it. They might be broken this week or they might stand for 30 years, you never know. To have your name in the record books like that is definitely an added bonus and something I will cherish when the career is over."

Stenson admits his current unconvincing form means he is only "living in hope" that he can emulate Padraig Harrington in retaining his title at Birkdale, but has not given up hope of more major success.

"Looking at my record, it's always been the Open Championship and the US PGA I've performed best in," he added. "Those are the two we have left this year, so we better get at it!"
::: Henrik Stenson was talking on behalf of The Open patron HSBC. HSBC are offering free golf during the week of The Open. For more information, please visit: https://www.theopen.com/HSBCHour