Spain's Jon Rahm set his sights on winning the Open Championship after storming to a resounding victory in the Dubai Duty Free Irish Open, his second win in just his 25th event as a professional.

Rahm fired two eagles and five birdies in a closing 65 at Portstewart Golf Club to finish a tournament-record 24 under par, six shots clear of Richie Ramsay and Matthew Southgate.

David Drysdale, Justin Rose, Ryan Fox and Daniel Im were a shot further back in fourth, with Drysdale completing a brilliant course record of 63 with seven consecutive birdies.

Ramsay, Drysdale and Fox secured the three places available at Royal Birkdale via the Open qualifying series, with Drysdale edging out Lim - who bogeyed the final hole - by virtue of his higher world ranking.

Rahm, who began the day tied for the lead with Im, holed out from 150 yards for an eagle on the fourth and added four birdies in a row from the seventh to take command of the $7million event, part of the European Tour's lucrative Rolex Series.

The biggest danger to the 22-year-old came in the shape of a possible penalty for incorrectly replacing his ball on the sixth green, but after being cleared of any wrongdoing by chief referee Andy McFee on the 13th, Rahm promptly holed from 30 feet for an eagle on the next.

Andy McFee - European Tour Senior Referee - explains why Jon Rahm was not penalised for not replacing his ball in the exact marked spot. pic.twitter.com/vxNiekysKB

Rahm only turned professional in June last year but claimed his first PGA Tour title at Torrey Pines in January and will climb to a career-high eighth in the updated world rankings.

"The trophy is right next to me and my name is going to be there forever now, but it seems hard to believe that it's happened," Rahm said.

"I just look at it and I see Nick Faldo, Jose Maria Olazabal, Colin Montgomerie, Ian Woosnam, Seve (Ballesteros). That's a list of the greatest European Tour players ever and to have my name next to it, and the last one, Rory McIlroy, it's so special.

"To actually play my best golf that I can remember and shoot 24 under on this golf course and win it by six, that is not something I would have believed I was capable of. I learned a lot about myself and it's a really, really special day.

"It proves to me I can perform properly on a links golf course and that's what I've got to take to The Open. I know now that I have what it takes.

"I know I can read the putts right, I know I can interpret the wind and I can hit the shots and I can manage myself around the golf course properly enough to have a chance to win The Open." 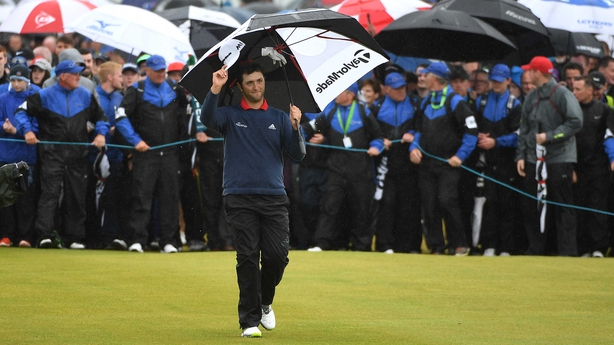 The best Irish performer of the week was Gavin Moynihan who hit a superb 64 on Sunday to finish on -13 in a share of 14th place. The 22-year old turned pro in 2015 and is more often found on the fairways of the Challenge Tour.

Shane Lowry also finished in style, thanks thanks to a flawless 66 in the final round and the Offaly man finished in a tie for 20th on -12 for the week .

Of the remaining Irish, Michael Hoey hit a final round 67 to finish on -11, while Padraig Harrington and Paul Dunne ended on -9 and -7 respectively. 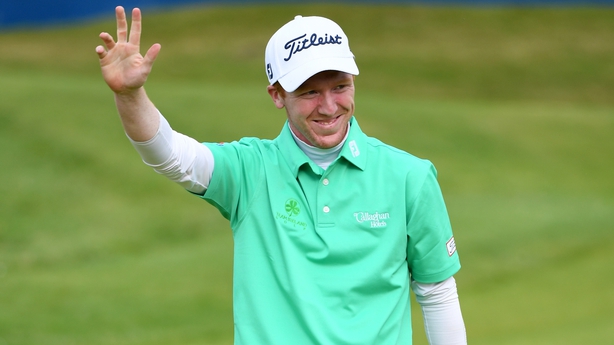 Southgate's share of second was the best finish of his career to date, eclipsing his fourth place in the same event last year.

"After last year I wanted to prove to everybody that it wasn't a fluke and that I belong out here playing," said the 28-year-old, who recovered from testicular cancer to secure his European Tour card via the qualifying school in 2015.

"It looks like it's going to keep my card for next year, which at this level of golf I think is an incredible achievement for everybody. I'm absolutely thrilled to bits."

Southgate had already sealed his place in the Open via final qualifying on Tuesday, but Ramsay had forgotten all about it as he chased a fourth European Tour title.

"I knew there were spots but it had totally gone from my mind," Ramsay said after a closing 66 which included four birdies and an eagle in the space of seven holes.

"I was that focused on what I was doing, but it's a massive bonus. It's a golf course that I know. I've played the British Amateur there and it's one of my favourites to play.

"I'm massively pleased. It was a tough last few weeks but I'm a big believer that if you work hard, success will come. This year it's taken a little longer than it should do but I've managed to get there in the end."