American Brooks Koepka revealed how advice from Dustin Johnson helped him succeed the world number one as US Open champion in record-equalling fashion.

Koepka carded a closing 67 at a windswept Erin Hills to finish 16 under par, matching the tournament scoring record set by Rory McIlroy at Congressional in 2011.

The 27-year-old began the day a shot off the lead but fired six birdies and a solitary bogey to finish four strokes ahead of overnight leader Brian Harman and Japan's Hideki Matsuyama, with England's Tommy Fleetwood a shot further back in fourth.

Shane Lowry was the only Irish golfer to make the weekend and the Offaly man finished on three over par in a tie for 46th place.

"It feels amazing to get my name on this trophy with so many other great names," Koepka said after becoming the seventh first-time major winner in succession, a run stretching back to Jason Day's victory in the 2015 US PGA Championship.

"It's truly an honour. It's probably one of the coolest things I've ever experienced and to do it on Father's Day is pretty neat. I didn't exactly get my dad a card, so this works."

Koepka's name will be etched on the trophy alongside that of his good friend Johnson, who missed the cut at Erin Hills but spoke to Koepka after Saturday's third round. 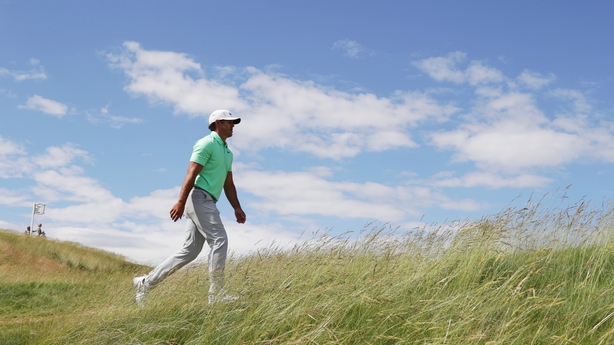 "Dustin called me and told me just stay patient," Koepka added. "Just keep doing what you're doing, you're going to win the thing, and just don't get ahead of yourself. A bunch of people told me that.

"And I felt like I really stayed patient all week. I felt like that has been the thing lately with me, why I haven't really played that well - I've been trying to win so badly. I felt like I've underachieved."

Fleetwood, who was hoping to become only the third English winner since 1924 after Tony Jacklin (1970) and Justin Rose (2013), began the day in a tie for second with Koepka and made an encouraging start with a birdie from eight feet on the second.

However, the 26-year-old from Southport then bogeyed the third, sixth and eighth and although he bounced back with a birdie on the ninth, he was unable to convert good chances early on the back nine before Koepka pulled away.

"I've never contended for a major before, so when you get to Saturday and Sunday you've got to see how you react and how you feel," said Fleetwood, who climbed to a career-high 21st in the world rankings.

"I enjoyed playing late on Saturday and Sunday and then next time, whenever that comes, I know that inside myself I feel fine and I can contend for the victory."