Jamie Donaldson will take a two-shot lead into the third round of the Nordea Masters, but Paul Dunne failed to make the weekend despite a two-under-par 71 on Friday.

He scrambled well at Barseback Golf and Country Club, shooting two-under, but it wasn't enough, leaving him three-over for the tournament and outside the cut.

Donaldson carded a second consecutive 69 to reach eight-under-par, with Italy's Renato Paratore his nearest challenger on six under.

Englishmen Graeme Storm and Max Orrin and France's Benjamin Hebert are a shot further back, with defending champion Matt Fitzpatrick on three under after carding birdies on the last three holes in his 70. 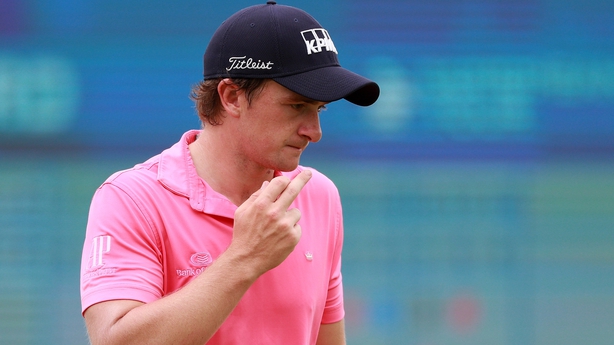 Open champion and Barseback member Henrik Stenson carded a 72 to lie seven shots off the pace alongside fellow Swede and BMW PGA Championship winner Alex Noren, who returned a 70.

Donaldson reached a career high of 23rd in the world in 2014, the year in which he secured the winning point as Europe defeated the United States at Gleneagles to win a third successive Ryder Cup.

However, the 41-year-old has struggled for form and fitness since winning the Thailand Golf Championship in December 2015 and was lucky to escape serious injury to his left hand the following month after an accident with a chainsaw while gardening.

Donaldson had missed the cut in five of his nine events in 2017, but the world number 256 carded five birdies and one bogey - his first of the week - on Friday to head into the weekend in pole position.

"There were times when the ball wasn't where I wanted it to be, but I made some great escapes and the chipping and putting has been better the last couple of days," Donaldson said.

"I've been playing some nice golf and just not been able to put it all together; the first couple of days here I've been able to do that.

"I've just got to keep doing the same things, don't think too far ahead about winning tournaments as yet because it's only two rounds in."

Storm, who is seeking his second win of the season after beating world number two Rory McIlroy in a play-off for the South African Open in January, carded a 68 which featured seven birdies and two bogeys.

The 39-year-old from Hartlepool bogeyed the final hole at the Portugal Masters last season to seemingly miss out on retaining his card by just 100 euros, but was handed a lifeline when American Ryder Cup star Patrick Reed failed to play enough events to remain on the Race to Dubai.

That meant Storm moved up one place in the standings to claim the 111th and final card and he made the most of his good fortune by beating McIlroy in dramatic style earlier this season.

"After what happened in Portugal last year, getting the reprieve of getting my card back, it kind of made me think I need to work harder, but I need to relax as well," Storm told Sky Sports.

"The mental side of it is always a thing that's kind of dragged me down but I'm enjoying my golf, I've got a great caddie on the bag that talks to me a lot. We're good friends and he's pushing me as hard as he can."

Orrin, who secured a rookie season on the European Tour via the qualifying school, had shared the overnight lead with Paratore but the 23-year-old could only add a 73 to his opening 68.