Masters champion Sergio Garcia roared back into contention at The Players Championship, but it is J.B. Holmes and Kyle Stanley who will begin the final round top of the leaderboard.

Holmes, a four-times PGA Tour winner, found places at the TPC Sawgrass previously untrodden by man, yet somehow managed only one bogey in a two-under-par 70, on an afternoon that started breezy but fell calm over the final hour or so.

Stanley, meanwhile, settled down after a slow start and proceeded to hit the ball like a metronome, hardly straying from the middle of the fairway but managing only a pedestrian even-par 72.

Holmes and Stanley, at nine-under 207, headed South African Louis Oosthuizen (73) by one stroke, with South Korean Kim Si-woo (68) two behind heading into the final round.

Sergio Garcia recovered from a slow start and found his old form to storm into contention where the Spaniard is five-under-par and just four shots off the lead.

Further down the leaderboard, Rory McIlroy was still struggling to rediscover his top form in his first event since the Masters, after which he got married and signed a multi-million pound equipment deal with TaylorMade.

McIlroy, who will have an MRI scan on Monday after suffering a recurrence of the back problem which ruled him out for seven weeks earlier this season, made the ideal start with a birdie on the first.

But the four-time major winner then bogeyed the fifth. And although he did birdie the ninth for the third day running, birdies on the 16th and 17th were cancelled out by bogeys on the 14th and 18th.

The resulting 71 left McIlroy on one under par overall.

Graeme McDowell meanwhile is two shots further back from McIlroy after a two over par round 74.

Two bogeys on the front nine holes, proceeded by another on the 14th and a double bogey towards the end of the day saw him fail to make inroads despite three birdies.

A 2008 Players Championship winner and frequent contender in the tournament, Garcia enters Sunday's final round with new-found status to match his strong history at TPC Sawgrass.

"I've told you guys many, many times it's one of my favorite golf courses we play all year, and for some reason I can see what I want to do," Garcia told reporters.

"I just like the golf course. I've been fortunate to be very successful here." 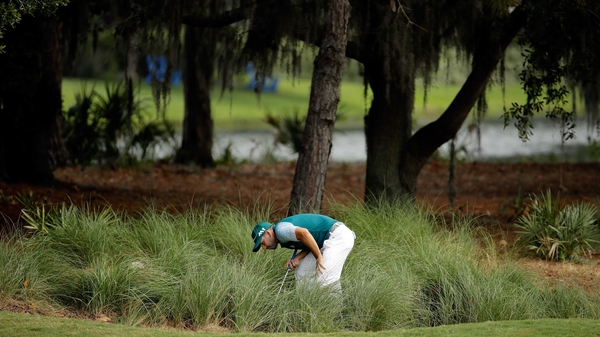